Our client, age 25, had dinner with his brother in a Rosemead restaurant. 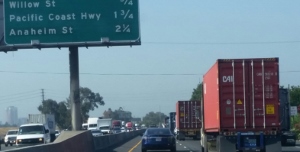 Southbound Interstate 710
Several hours later, at approximately 2:45 a.m., CHP officers observed our client’s car stopped at the shoulder of the southbound I-710 Freeway, just south of the intersection with the I-105 Freeway.  The car had no lights on and its engine was off.  Our client told officers that his car battery had died and he was waiting for officers or help to stop by.

One of the officers approached our client, who was standing on the passenger side of the car with the door open, he suspected our client had been drinking alcohol.  Our client admitted as much, stating that he had one drink of wine at about 9:00 p.m., which was over five hours earlier.

This did not seem good for our client, but the officer failed to establish when our client was last driving.  He did not ask Defendant any questions or elicit any information to fix a time when his car broke down, how long he had had been on the side of the road or even when our client left the restaurant, where he originated before his car broke down.  The officer also did not note if the hood of the car was warm or anything else that would suggest the car had recently been in operating order.

The client was released from the police on his own recognizance after a few hours.  He then called Greg Hill & Associates and met with Greg.  Greg listened to his story and explained that Vehicle Code § 23152(b) states:

Greg then appeared at the arraignment and discussed this issue with the district attorney.  The DA listened respectfully, but was not willing to dismiss the case.

Greg therefore filed a motion to suppress evidence based on the blood alcohol content being legally irrelevant.  The motion explained the facts of the case and how 23152(b) would not apply.  Furthermore, the motion explained how reverse or retrograde extrapolation of one’s BAC is not to be relied upon in criminal cases. State v. Mada. (Texas).  Furthermore, the motion described how renowned prosecution DUI expert Kurt Dubowski even says that retrograde extrapolation has never been scientifically accepted.   It is fundamental therefore that the prosecution cannot avail itself of the three hour presumption under 23152(b) and extrapolate our client’s BAC back in time to arrive at a BAC within three hours of our client leaving the Rosemead restaurant.

The motion then quoted Dr. Dubowski, who summarized the problem with using retrograde extrapolation in DUI cases as follows:

It is unusual for enough reliable information to be available in a given case to permit a meaningful and fair value to be obtained by retrograde extrapolation.  If attempted, it must be based on assumptions of uncertain validity, or the answer must he given in terms of a range of possible values so wide that it is rarely of any use.  If retrograde extrapolation of a blood concentration is based on a breath analysis the difficulty is compounded. 21 (1) Journal of Forensic Sciences 9 (January 1976).

Greg explained that the reason for this is because the expert must make over three dozen assumptions concerning a subject’s metabolism of alcohol, which is very unsafe for a single individual.  The assumptions range from the subject’s fitness level, lung size, lung condition, blood health, kidney function, liver function, breathing patterns, dental hygiene, presence or of lack of GERD (gastro esophageal reflux disease), body temperature and hematocrit level (the ratio of red blood cells to total blood volume), among other factors.  Indeed, our legislature recognized the thicket of complexity this analysis entailed for analysis of an individual’s BAC within three hours by imposing a partition ratio and the three hour presumption.  To ignore this statutory intent would be to re-enter the exact same analysis our legislature recognized as fodder for experts.

Retrograde extrapolation is the process whereby the result of a blood alcohol test taken sometime after an incident is used to determine the blood alcohol concentration at the time of the incident. In every case, there is insufficient information available to the expert to make this calculation. Assumptions are liable to he made which are not applicable to any specific individual. These assumptions would include that the alcohol was completely absorbed at the time of interest, the defendant eliminated alcohol at the average rate, and that the chemical test was proper and valid.

After Greg filed the motion, the DA called up Greg and offered a plea bargain for our client that our client plead to a wet reckless with first-time DUI terms.  This meant a three month DUI program, rather than an 18 month program.  It also meant our client would not have to install an ignition interlock device (IID) in his car, which he would if he had entered a plea to DUI.

The Client was very happy with this offer and readily agreed to it.

For more information about what to do if stopped for DUI and what the likely punishment is for a second DUI, click on the following articles: