Our client, age 26, had moved to the Los Angeles area from San Bernardino for better work as a Lyft driver.  He was not too familiar with the roads and which areas were known for being dangerous and which areas to stay away from, especially after dark.
Many people are aware that Long Beach Boulevard is an area known for prostitutes in the area just north of the 91 Freeway for about a mile.  It remains dangerous, but there are few other areas that are so seedy.
Our client was driving north on Long Beach Boulevard several miles north of the seedy area of Long Beach Boulevard.  He was about ten blocks north of Rosecrans Avenue, almost near the 105 Freeway.  As he crossed Euclid Avenue at about 8:45 p.m., he noticed a woman standing alongside the road, looking like she was waiting for someone she knew to pick her up.
The traffic light facing our client then turned red and the woman approached our client’s car, still in a lane of traffic, but stopped.  She told him that he looked “mighty fine” and he told her that “you look pretty good, yourself.”  The woman was a police decoy, placed in this area to talk to men passing by to try to engage each in conversation that might lead to an arrest. 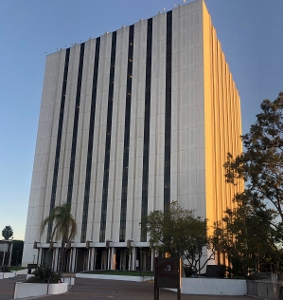 Compton Courthouse
The woman then told our client that she “wanted to get to know him better.”  Our client then asked, “well, how?”  She then proposed that the two get a motel room and “relax.”  To our client, this seemed quite aggressive, but he was stopped at the red light and had no place else to go.
She then told him that she already had such a motel room, but asked whether he had $40 “for everything.”  Our client was a bit hesitant, as this conversation was going too fast for him.  However, he replied “yes” and she instructed him to turn at the corner and enter the motel parking lot from the alleyway.  He then said “OK.”  She then told him which room to meet her in.
The light then turned green and our client moved forward, turning the corner, driving about 100 feet and then turning right into the alley leading to the motel parking lot.
Our client then turned into the motel parking lot and got out of his car, with $50 in his pocket.
Before he could walk even twenty feet from his car, uniformed police officers surrounded him and escorted him to a motel room.  Once inside, he could see five or six other men in handcuffs who had been arrested for the same thing.
He then provided his name and address and was cited for solicitation of prostitution (Penal Code § 647(b)(2)) and released from the motel, free to drive home.  He signed a promise to appear in the Compton Superior Court about five weeks later.
A week later, he called Greg Hill & Associates and discussed the case facts with Greg Hill.  He explained what had happened and how he was quite concerned that a conviction for solicitation of prostitution might lead to him losing his job with Lyft.  The client had no prior criminal history.
Greg then explained how such cases are handled and discussed the entrapment issue our client believed was a defense to the charge.  Greg explained how the recent publicity regarding human trafficking had changed how solicitation of prostitution cases were resolved now, as compared to five years ago.  No longer were such first-time cases resolved by a dismissal after defendant attended an AIDS awareness class and was tested for HIV and AIDS.
Greg then went to court and sought an office hearing for our client, as he was young and had no prior criminal history.  After all, our office had resolved prior cases such as this via an office hearing and no case even being filed or even after the case was filed, the case was handled by an office hearing and a dismissal.
However, in this case, the young prosecutor reported that his office was no longer offering office hearings, but he did offer our client formal diversion, wherein he would enter a no contest plea to a violation of Penal Code § 647(b)(2) and then, if he performed five days of Cal-Trans and attended an AIDS Education and Prevention Class, plus took the HIV / AIDS test offered with the class, he would “earn a dismissal” after six months, assuming he picked up no new cases in that time.
Our client accepted the offer, happy that Greg had pushed on the prosecutor for an office hearing, allowing for a counter-offer of formal diversion.  The client would avoid a conviction and keep his job.
For more information about prostitution cases, please click on the following articles:
Contact us.
Serving Torrance, Long Beach, Compton, Airport Courthouses and Other Courthouses.