Our client, age 56, was driving home along Long Beach Boulevard.  He was coming from work at a nearby hotel where he worked as a security guard.  He had come from Egypt to the United States two years earlier to start a new life and for better medical care, as in Egypt it was tough to get good medical care, which he needed for a prostrate condition he recently experienced.  His English was poor, so he stayed with friends who were also from Egypt and who English was much better.  Our client was taking English lessons to learn English.

It was early evening when he left work, just barely after dark.  Every day, as he drove home, he would see the prostitutes along one stretch of Long Beach Boulevard, about a half-mile north of the 91 Freeway, concentrated near a few motels that they sometimes arranged to meet Johns at who wanted a hotel room rather than a “car date.”

As the light turned red before him, our client yielded and brought his car to a stop.  He was scheduled for prostrate surgery in about a month.  A biopsy had determined it was cancerous.  He was impotent, but this did not stop him from looking at the prostitute along the roadside. 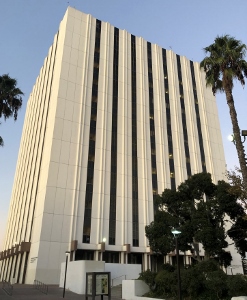 The woman, who our client believed was a prostitute, was actually a police officer decoy posing as a prostitute in the same area.  When she saw our client make eye contact with her, she walked over to the passenger side window of his car and our client rolled down the window to let her talk to him.  He was curious to interact with her just by talking to her.

He also wanted to get a better look at her.  She asked him a few questions and pointed to a location for him to pull over to meet with her.  After we were contacted by his English-speaking host when he received a citation, we asked the host what the prostitute said to our client and our client told his host that he had no idea what she said because he could not understand her English.  Our client spoke Arabic, but only knew a few words of English.
However, he tried to speak to the prostitute in his broken English, but he really had no idea what she was saying or asking him.  Therefore, he really could not agree to anything, for example, to give her money for sex, which is required for a violation of Penal Code § 647(b), solicitation of prostitution.

However, when the traffic light in front of him turned from red to green, he waived to the woman and moved forward to leave and continue home.  He was satisfied with his brief face to face encounter.  He got to see her up close and have her talk to him, even if he really could not understand what she was saying.

However, no less than 100 yards later, police pulled over our client.  They issued him a ticket for solicitation of prostitution.  He signed the ticket’s promise to appear in the Compton Superior Court about eight weeks later.

He then continued home and spoke to his English-speaking host, explaining in Arabic what had happened.  The host then called Greg Hill & Associates and spoke to Greg Hill about their friend from Egypt.  Greg explained that the client’s movement forward, although in response to a green light, was apparently seen by the police decoy as our client taking a substantial step forward toward meeting up with her around the corner.

Greg asked if the client was stopped by Bullis Road and the English-speaking host read on the ticket that indeed that was the location.  Greg explained that this was precisely the location where the Compton Sheriffs prostitute decoys worked.

Greg told the English-speaking host that he would write a letter to the Compton District Attorney’s office and the Compton Police Department, explaining that our client’s extremely limited English made any agreement between him and the decoy impossible because he simply could not speak English well enough.  So Greg requested that the English-speaking host provide Greg with the client’s Green Card.  Greg also obtained our client’s old Egyptian Army identification card to show he was truly from Egypt and that Arabic was his primary language.

Greg further enclosed in the letter a photocopy of our client’s doctor appointment for his upcoming prostrate surgery.

Greg then did prepare the letter, explaining that our client could not understand English well enough to form an agreement with the decoy and only drove forward because the traffic light color had changed, not because he intended to meet the decoy around the corner like was common.  Moreover, our client was impotent, so he could not have sex with her anyways, as his upcoming prostrate surgery suggested.

Greg received no response to the letter, but when he went to the Compton Courthouse for the arraignment, he found out that no case was filed, apparently because the Compton District Attorney and / or the Compton Police Department better understood the context of our client’s behavior and decided he had not formed an agreement to exchange money for sex with the decoy.

The client’s English-speaking host, when advised of this, told us the client was very thankful that he had contacted us and we had explained the client’s poor English, movement of his car and his impotence.
For more information about prostitution, please click on the following articles:
Contact us.