Our client, age 52, was driving on Long Beach Boulevard in late January.  It was about 7:00 p.m., so it was dark.  He was coming home from work as a machinist at a major defense contractor.
He spotted an attractive African-American woman standing on the side of the street wearing a very short red skirt, a tight-fitting white shirt and white high heels.  By the way she was walking, he understood she was a prostitute, or at least seeking to appear like one.  However, she did not look weathered like many prostitutes.  She had good posture and walked like she was in shape.
Our client was in no hurry to go home, as his wife worked late and their kids were off to college.  So our client turned around and looped back to speak to the woman in the red mini-skirt.
As he pulled over to speak with her, he rolled down his passenger-side front window of his pick-up truck.  He came to a stop alongside the curb and told the woman that she was too good looking to have to walk home.  He then asked the woman if she needed a ride.  The woman answered by asking him if he wanted a date.  Our client said he might be interested and the conversation proceeded to a discussion of specific sex acts for various prices. 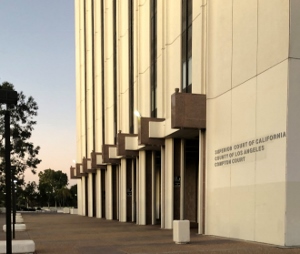 The client eventually agreed to meet the woman a block away, but on Elm Street, a side-street from Long Beach Boulevard.  Accordingly, he moved forward and turned onto Elm to wait for the woman.
Before the woman could even get close, police cars swooped in behind our client and in front of his car to block him in.  The client then realized that he had been speaking to a police decoy posing as a prostitute.
This was a familiar scene to our client.  Thirty years ago, he had been arrested for battery (Penal Code § 242), but the case was ultimately resolved for disturbing the peace (Penal Code § 415).  The next year, while still on probation for the 415, he was arrested and convicted of carrying a loaded firearm in public (Penal Code § 12031(a)).  The very next year, in 1989, he was arrested and convicted for carrying a loaded firearm in public (Penal Code § 12025(a)).  The same year, he suffered a conviction for misdemeanor battery (Penal Code § 242).  Our client then passed nearly twenty years without any law enforcement contact until 2009, when he was arrested and convicted for making a false report of an emergency (Penal Code § 148.3(d)).
The client was released at the scene after signing a promise to appear in the Compton courthouse in about three months.  He immediately called several attorneys, one of which was Greg Hill & Associates.  He described to Greg what had taken place and how nervous he was about losing his job with the conviction on his record.  He told Greg that he had no prior convictions.
Greg explained how such cases were typically handled at the Compton Courthouse, but cautioned that with Supervising Los Angeles District Attorney’s recent public comments about sex trafficking, Greg had seen other Los Angeles County courthouses treat prostitution cases more punitively.  The old days of just taking a prostitution class and undergoing an HIV / AIDS test for a dismissal on a first-time prostitution case seemed to be over.
Greg then appeared in the Compton Superior Court on the case and found out that our client actually had a prior criminal history.  The young prosecutor on the case told Greg that due to our client’s prior history, the plea bargain offered was 36 months of summary (informal) probation, a $300 court fine plus penalties and assessments (total of about $1,350), 40 hours of community service, a prostitution diversion program and an HIV / AIDS test.  Greg was shocked with the offer, but understood the basis for the offer.
Greg then conveyed the offer to the client, who admitted to the prior history.  Greg then asked the client to provide him with a resume, any awards he had received at work (he had many), as well as photos of his family.
Greg then returned to court in about a month and there was a more senior, different prosecutor present.  Greg then discussed the case with the prosecutor, who Greg had as opposing counsel on many prior cases in Compton over the years.  The prosecutor then offered “DA Diversion,” under which our client would earn a dismissal by performing ten days of community labor, attend an AIDS education class and HIV / AIDS testing and promise to stay away from the area of the arrest.
The client accepted this offer and, six months later, earned the dismissal.  He was happy that Greg’s experience in the Compton Court helped avoid a further conviction for our client and saved our client from losing his job.
For more information about prostitution, please click on the following articles:
Contact us.
Serving Torrance, Long Beach, Compton, Airport Courthouses and Other Courthouses.