Our client was on the verge of attaining her cosmetology license, but could not do so with a felony conviction for a violation of California Health and Safety Code § 11351 (Possession of a Controlled Substance for Sales) from nearly three years earlier.  The State of California would not issue such a license with such a conviction, at least not unless it was first expunged.

She came to our office nearly in tears, having realized that her conviction would erase her hundreds of hours of training at the nearby Flavio Beauty College in Torrance (now out of business).  Greg Hill met with her and went over the terms of her plea bargain in the underlying case, which was reached when she grabbed a large baggie of cocaine just as police were pulling over her boyfriend at the time.  She was in the car next to her boyfriend and thought having possession of the drugs would prevent him from being charged with possession.

She wanted to take the blame for the drugs, not him, because he was on parole at the time and she knew if he were arrested, he would head back to prison, away from her.  This tactic did not work, as he was arrested with her on other charges and he did return to prison, while she was prosecuted for sales of a controlled substance (a felony even after Prop 47 passed later in in 2014).

A few months later, the client returned with proof of completion of her community service, as well as proof that she was current on all formal probation fees.  She also showed us receipts for having paid all court fees associated with her plea bargain.

Our office then got to work, preparing two motions.  One motion was for modification of probation to end it under Penal Code § 1203.3.  The second motion was for expungement of the conviction under Penal Code § 1203.4.  At the same time, our client assembled a “Good Gal” packet with pictures of her, a short autobiography of what she had done with her life since her conviction and letters of appreciation for her work at Flavio’s Beauty College.  She also had some certificates of appreciation for volunteer work, as well as an award for joining the local American Legion.  She had also participated in several local 5K runs for charity and received certificates of appreciation. She was certainly trying to turn her life around. 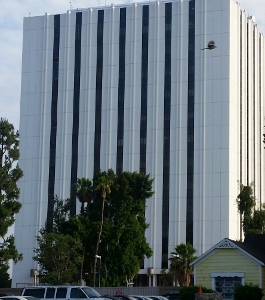 Compton Superior Courthouse
We took our client’s “Good Gal” packet and integrated it into a declaration that became an integral part to each motion.  We then attached each of the certificates, awards, photographs and even her autobiography as separate exhibits to the declaration, so the judge ruling on the motion would be persuaded, we hoped, to end probation early and expunge the conviction.

Both of our client’s motions were granted.  At the time, Greg Hill & Associates always asked the client to attend the hearing on such motions, as we believed it helped focus the judge’s attention on granting the motion (we no longer suggest this).  When an attorney is standing alone in front of him or her (the judge), it is easier for the judge to deny the motion.  It is more difficult if the client has also come to court when not required.