Home
Other Information
Criminal Defense Articles
Commutation of a Sentence, Who’s Eligible, How to Do?

Commutation of a Sentence, Who’s Eligible, How to Do?

In any discussion of commuting a sentence to reducing or eliminating years that a person serves in prison, one must first and foremost be clear about who is an is not eligible for this relief from the state governor.  If a sentence is commuted, it can make the prisoner immediately eligible for parole and a parole hearing (yet parole can then be denied).

The Gist of this Article: It is important to understand that if the Governor commutes a prisoner’s sentence, which happens rarely, that prisoner is then eligible for parole, which can be then denied.  The Governor, however, usually asks the Bureau of Parole Hearings (BOPH) to evaluate a commutation request before deciding on the request, so if the BOPH recommends granting the request, parole will usually be granted as well.

The applicant must be currently serving a jail or prison sentence within California for a violation of California law.  This may sound rather fundamental, but this means that applicant cannot seek a commutation of a federal sentence for a violation of a federal offense, a military crime (a violation of the Uniform Code of Military Justice) or a violation of the law of another state or country (this situation, although rare, can arise and involves someone in a California jail or prison).
More importantly, it is important that the applicant know that he or she cannot seek a commutation of a sentence if the person was convicted of two or more felonies (which is very common) unless a majority of the California Supreme Court justices consent.  Penal Code § 4802.  In the context of a death sentence that one seeks to be commuted either for immediate eligibility for parole or having the sentence reduced to life in prison, it is worth noting that most sentences of death involve convictions for not just one felony.
However, someone convicted of many misdemeanors and one felony can directly seek the governor’s commutation of the sentence. 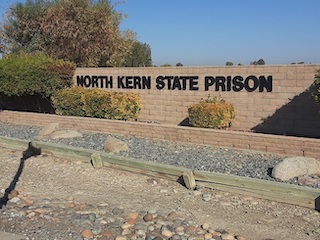 Adelanto North Kern State Prison
To apply, one must first notify the district attorney of each county (hopefully there is only one!) in which the applicant was convicted.  The form to provide such notice and the application for executive clemency are available on the California Governor’s website.  This notice to the DA must be sent at least ten days before applying to the Governor.  There is an affidavit that the applicant must sign in the presence of a notary and have notarized.  It is probably prudent to send this notice via registered or certified mail to ensure it is professionally delivered and given appropriate attention by the DA’s office.
The DA is then supposed to mail an acknowledgement of receipt to the Governor’s office.
The DA then usually notifies the victim(s) of the request for commutation of the sentence.
The application must then complete and mail a notarized application to the governor.  The application is available at on the California’ governor’s website at www.gov.ca./wp-content/uploads/2017/09/Application_for_Executive_Clemency.pdf.
The address to mail it to is:   Governor’s Office
Attn: Legal Affairs
State Capitol
Sacramento, CA  95814

The real question everyone wants answered, however, in calls that we have received wherein commutation of a sentence is discussed, is “Well, what are his chances?”
Our answer is never “it’s a slam dunk.  Don’t worry.  He’ll be out in two weeks.  Plan the welcome home party now.  Send out the invitations and book the band.”
Instead, we explain that in general, it is rare for the Governor to commute a sentence.
What will be considered?  First and foremost is the severity of the conviction.  This is given perhaps the most thought, which includes consideration of the injury and harm to the victims.  The totality of the circumstances surrounding the offense is certainly evaluated, including the prisoner’s age at the time of the offense, any gang memberships, how much time has passed since the conviction, the prisoner’s conduct in jail or prison, any education the prisoner has undertaken while in jail or prison (including being a tutor for others or teaching a class), evidence of remorse for the offense, public opinion about the offense, the opinion of the DA and the victim about ending, shortening or changing the sentence (which usually includes an evaluation of community safety if the inmate is released) and whether the prisoner will have a job and a place to live upon release.
The applicant must disclose any fees paid to an attorney in helping with the application for commutation.  The application is otherwise free.
If the Governor gives serious thought to the application, he will most likely refer the application to the Bureau of Parole Hearings (BOPH) to investigate and recommend how it believes the Governor should act.  This investigation can include interviewing victims and witnesses, sometimes with the help of the local police to where the offense took place.  The recommendation will often include a summary of the offense, often prepared by the prosecutor.
The Governor’s office may then request additional information from the applicant, depending upon what the BOPH reports and recommends.
If the applicant has more than one felony conviction, the Governor will refer the application to the California Supreme Court if the Governor is inclined to grant the application.
For more information about sentencing issues in general, please click on the following articles:
Contact us.
Serving Torrance, Long Beach, Compton, Airport Courthouses and Other Courthouses.