Our client, age 34, was arguing with his girlfriend, a professional dancer.  He had gone to a North Hollywood dance studio with her one night, where she was giving a class.  Our client had been drinking.
After her class ended, an argument erupted between the two and the client’s girlfriend rushed out to her car to drive away without him.  The argument became loud enough that others in the parking lot could hear the two, so when she ran away towards her car and he followed, the witnesses knew the conflict was getting serious.
Our client’s girlfriend then got in the car and tried to start it to get away.  She locked all the car doors.  Our client then grabbed a plastic orange cone that was nearby and threw it at the car.
The cone broke the front windshield, showering glass onto the legs and arms of our client’s girlfriend, who then put the car in reverse and left.
Our client walked away from the scene, as several onlookers called 911.
Officers from the Los Angeles Police Department found our client in a local McDonald’s nearby and arrested him on charges of felony domestic violence.  Police took photographs of the broken car window and the cuts on the arms and legs of our client’s girlfriend, who had also called 911. 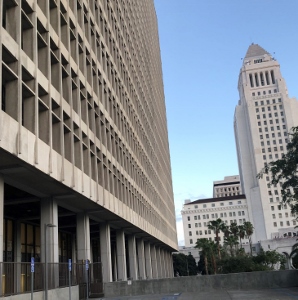 CCB Courthouse>
Our client’s mom in Florida posted bail, $50,000, for our client using a bail bondsman.
The client then came to Greg Hill & Associates and discussed the case with Greg.  The client explained how alcohol had been a big problem in his life since he left the Army about two years earlier.  He had served for three years and six months in the U.S. Army as an enlisted man.  While he never deployed overseas, he was medically discharged with full disability for injuries to his hips, legs and sciatica.  He also suffered form tinnitus, a constant ringing in his ears as a result of a training accident.  He used alcohol to dull the pain and ease his frustration with his injuries, but in doing so had become an alcoholic.
Greg explained first and foremost why this case was being brought as a domestic violence case and not a vandalism case.  Greg then explained what the typical defenses are to a charge of domestic violence and what the punishment is for both felony and misdemeanor domestic violence.  Greg said he expected the case to be brought as a misdemeanor domestic violence case, not a felony.
Greg then explained military diversion, under Penal Code § 1001.80, which he thought should be requested also under military diversion, domestic violence is excluded from eligibility.  Greg explained that the code states that the code excludes cases where “force or violence is applied against the person of another” and here, that arguably was not applied.  Instead, it was against the car, not directly on his girlfriend.
Greg then appeared in the Clara Shortridge Foltz criminal courts building (CCB) with the client for the arraignment.  As Greg predicted, the case was filed as a misdemeanor, but there was a second incident charged, from eight months earlier, wherein our client also beat up his girlfriend, but no case was filed.   Three people called 911 on our client on this other, earlier case and the calls described some fairly serious violence, but the case was never filed.  It also turned out that our client had a prior restraining order issued against him by another girlfriend. This was not expected in the complaint.
The Los Angeles City Prosecutor assigned to the case took this case seriously.  Her initial plea bargain offered involved three years of informal, or summary probation, starting with 120 days in county jail, plus all the standard domestic violence terms (52 approved batterers program classes, a $500 domestic violence fund contribution, $220 in court fines and a protective order in favor of the victim).
Greg nonetheless filed the motion for imposition of military diversion, which the judge appeared in favor of granting, but he stated he wanted to hear from the victim about whether she opposed such diversion.  The Los Angeles City Prosecutor’s office was extremely upset and vowed to appeal his ruling, if he were to grant the motion.
Greg and the City Prosecutor continued negotiating and she offered to drop the jail element entirely from the plea bargain, replacing it instead with 30 days of Cal-Trans.  The client and Greg discussed this new offer, the judge’s inclination, the Los Angeles City Attorney’s vow to appeal the ruling and just avoiding jail time.
The client decided to then accept the offer, preferring not to face any jail time.  He was happy that Greg had filed the motion, which although it may not have been granted, helped knock out the jail time that the prosecutor wanted to punish our client.
For more information about domestic violence issues, please click on the following articles:
Contact us.
Serving Torrance, Long Beach, Compton, Airport Courthouses and Other Courthouses.