Our client, age 35, was heading back to his car after a night out with friends in the downtown Hermosa Beach area.  It was just past 0200, as all the bars had just closed.  He was in the alley behind Tower 12, a new bar along the Pier Plaza area. 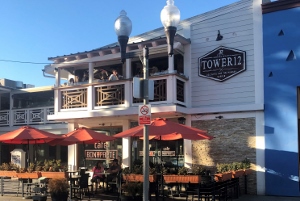 Our client had no prior records, which at age 35 was more significant than at age 22.  He worked for a Department of Defense subcontractor as an engineer and was a U.S.C. graduate.  He had a lot going for him.
As he walked along the alley toward his car in the four-story cement parking structure just north of the Pier Plaza area, he felt the need to urinate.  So instead of heading back to the bar he was in, or Tower 12, he decided to just urinate on the wall of the alley there.
As he did so, Hermosa Beach officers in a marked black and white police car turned into the alley and their headlights shined light onto our client while he was urinating.  According to the police report, police saw our client from behind, with a steady stream of urine going to the ground.  Police then saw our client zip up his pants and proceed to continue walking toward the four-story parking structure.
Police then asked our client to stop, which our client did, and police approached him.  Our client did not know if he was in trouble and for what (he had no idea that public urination was illegal), so when police asked him if he had just urinated, he nervously answered that he indeed had just urinated.
Police then informed him that it was illegal to urinate in public and asked for our client’s driver’s license.  Police then wrote out a ticket for our client and handed him the ticket, asking him to sign at the bottom a promise to appear in the Torrance Superior Court on a specific date.  Our client signed the ticket and it was detached for him to take with him.  Officers then wished him well and continued driving.
Our client returned home and looked over the ticket more closely, wondering exactly what it all meant for him and his job.  He noticed it stated he had violated Penal Code § 372, which the Penal Code called “public nuisance.”  It was a misdemeanor, which concerned him greatly.  He then used Google to educate himself and saw that Greg Hill & Associates had handled dozens of such cases out of Hermosa Beach.
So, he called Greg Hill & Associates and was able to immediately speak with Greg Hill about his ticket.  Greg asked for the facts of the case, which the client explained.  The client then explained that he had no prior criminal history and was concerned, due to his job as a government subcontractor as an engineer, if he’d lose his job with a misdemeanor on his record.
Greg explained his experience handling such cases in the Torrance Superior Court and recommended that the client attend ten Alcoholics Anonymous (AA) meetings prior to the arraignment.  He explained how he needed to use a sign-in sheet to document his attendance and how the meeting facilitator would initial his sign-in sheet, indicating a date of the meeting and the meeting name, i.e. “Wacky Wednesday” for Wednesday meetings, or “Friendly Fridays” for meetings on Fridays.  Greg also asked the client to send him a resume.  Greg explained that in the past he had been able to resolve many misdemeanor public urination tickets as infractions, but nothing was guaranteed, as such a resolution would be up to the discretion of the handling Redondo Beach City Prosecutor in court.
Greg then went to the arraignment on the client’s behalf in the Torrance Superior Court.  The client remained at work.  Greg read through the police report and then discussed resolution with the handling Redondo Beach City Prosecutor there in court.  Greg showed her that the client had an AA sign-in sheet showing he attended ten AA meetings immediately after receiving the ticket.  Greg also mentioned that the client had no criminal history and was 35 years old.  Greg described him as a U.S.C. graduate and an engineer for a defense contractor.
The prosecutor took this into consideration and graciously agreed to amend the complaint to allege an infraction-level violation of Penal Code § 415(2) (disturbing the peace by making a loud noise) if the client made a $550 donation to the Hermosa Beach Nuisance Abatement fund at the Hermosa Beach finance office.  The misdemeanor would then be dismissed.
The client agreed to such a resolution and had Greg Hill & Associates make the “donation” on his behalf.  Greg drove over to the Hermosa Beach finance office to do this for the client.
Greg then appeared in court again and showed the receipt for the donation to the prosecutor, who then agreed to add a count two for violating Penal Code § 415(2) as an infraction.  Greg then pled no contest to this on the client’s behalf and the misdemeanor was dismissed.
The client was happy with this resolution for his job and to keep his record free of any misdemeanor or felony.
For more information about public urination, please click on the following articles:
Contact us.
Serving Torrance, Long Beach, Compton, Airport Courthouses and Other Courthouses.