Our office receives about one call per week about traffic violations involving the use of cell phones.  The caller usually received a ticket for holding his or her cell phone to his or her ear (not in hands-free mode), talking or listening, while driving and simply wants to know if there is any defense.  There is a defense of holding the phone to call 911 or being called on an emergency (Vehicle Code § 23123), but otherwise, the defenses are strictly limited.
The following case tested a novel and perhaps clever defense: my car was not moving while the phone was in use.

Brief Synopsis:  One can be ticketed for using a cell phone (holding it to talk or listen) while driving even if one is using the cell phone while stopped and facing a red light.

On December 28, 2009, a Richmond, California, motorcycle officer pulled up at a red light alongside Mr. Carl Nelson.  The officer watched Nelson, who was sitting behind the wheel of his car, open his flip-style cell phone, dial a number and put the phone to his ear while holding the phone in his left hand.

Nelson then noticed the police officer alongside him and quickly ended the call.  The light then turned green, Nelson pulled forward, the officer activated his flashing light and pulled Nelson over.

The officer cited Nelson for a violation of California Vehicle Code § 23123(a), which reads:

A person shall not drive a motor vehicle while using a wireless
telephone unless that telephone is specially designed and
configured to allow hands-free listening and talking, and is used
in that manner while driving.

Nelson then fought the ticket in traffic court, arguing that because his car was not moving when he used his cell phone, he was not driving.  Nelson relied upon Mercer v. Department of Motor Vehicles (1991) 53 Cal.3d 753, wherein an individual was cited for DUI and the term “drive” was distinguished.

In Mercer, a person was found asleep, slumped over her steering wheel in a legally parked car.  The car’s engine was on and it was on a residential street.  The defendant in Mercer claimed his conduct did not fit the definition of “driving” and the court there agreed.  In Mercer, the court agreed, holding that the defendant did not impart “volitional movement” to the car, so he was not driving.

Nelson lost in traffic court and was ordered to pay a fine, including penalties, of $103.  The appellate division of the superior court affirmed the conviction.

Nelson then appealed to the First Appellate District court in San Francisco.  In People v Carl Nelson (2011) 200 Cal.App.4th 1083 (slip opinion at 2011 DJDAR 16531), the appellate court affirmed the lower courts.  In its ruling, the court held that the facts in Mercer, a DUI case, were quite different than those from Nelson, a driving with a cell phone case. 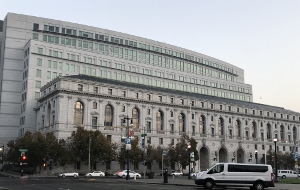 First Appellate District Court of Appeal in San Francisco
In Nelson, the court found, Mr. Nelson was operating his phone while in a “fleeting pause” from movement, while stopped facing the red light, so he was nevertheless driving.  After all, his car was not parked like in Mercer, and Mr. Nelson was not asleep, but awake and his car was still in gear to drive.  Moreover, the appellate court considered the narrow and strained interpretation of drive that Nelson urged as possibly resulting in numerous and significant public safety hazards on public roadways, as drivers could use their cell phones momentarily in even stop and go traffic, at stop signs, at pedestrian crossings, etc.  This would increase the number of distracted drivers, something the statute intended to prevent, and possibly encourage drivers to stop for prolonged periods at stop signs, etc., to continue their calls.

We appreciate Mr. Nelson’s argument and attempt to analogize his situation to the defendant in Mercer, however, the two situations are indeed distinguishable.  Mr. Nelson, after all, would have continued to use his cell phone but for recognizing that a police officer was observing him.  Therefore, his mental state was one of intending to move while holding the cell phone to talk or listen and consequently, he indeed violated Vehicle Code § 23123(a).