Can Rap Lyrics be Introduced to Prove Crime Happened?

Defense attorneys often lament the fact that judges will refuse to exclude, it seems, anything at trial.  Instead, a judge will allow the admission of evidence and comment, “but it is up to the jury to decide how much weight to give it.”  We think the following example epitomizes that type of mistake.

In a Nutshell: Rap lyrics written in a song performed by defendant cannot be introduced to the jury by the prosecution to prove defendant committed a murder in a gang case or even to constitute an admission  The evidence introduced had an unduly prejudicial and inflammatory effect toward defendant, but the verdict was not overturned because there was sufficient other evidence to support the conviction.

At about 8:20 p.m. on October 5, 2012, police responded to reports of gunfire on a residential street in East Palo Alto.  Police found Christopher Baker alive, but with gunshot wounds.  His bicycle was found nearby laying in the middle of the street.  Baker later died at the scene.
On the other side of the street was a still running Ford Escort, unoccupied and apparently stuck on a fence, with the keys still in the ignition.  Jerry Coneal’s blood was found in the Ford Escort and on the outside of another car parked nearby.
The registered owner of the Ford Escort was Lakeisha Campbell, who testified at trial that she loaned the car to her boyfriend, Miguel Rivera, who was a good friend of Jerry Coneal.  A couple hours after she lent the car to Rivera, Rivera called her to report the car had been stolen and to call the police.
Rivera and Coneal were members of the “Taliban” gang, whose territory included parts of East Palo Alto.  The Taliban had a longstanding and violent rivalry with another East Palo Alto gang called “Da Vill.”  Christopher Baker was a member of the Da Vill gang.
On September 30, 2012, less than a week before Christopher Baker was killed, two Taliban members were shot by a Da Vill member and a member of a gang allied with Da Vill.  On the same day that Baker was killed, there was a memorial for a Da Vill gang member,” The Box,” just around the corner from where Baker was killed. 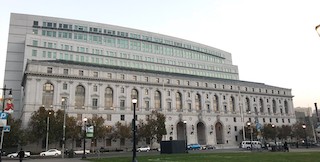 Court of Appeal First Appellate District San Francisco
On October 7, shortly after Baker was killed, a Da Vill gang member shot two Taliban members, one fatally.
On October 5, Jerry Coneal “liked” a Facebook post expressing birthday wishes to The Box.  The same day, Coneal sent a message on Facebook to a Da Vill member, asking to know who was the Da Vill member looking for him (to shoot him).  The response was “Damn. Shit real serious.”  Coneal responded, “Yup.  It’s gone get real, too.”  The prosecutor’s gang expert testified at trial that this indicated there would be a retaliation for what was perceived to be disrespectful conduct.
Through a series of interviews with various Taliban and Da Vill gang members, police narrowed their search for suspects in the Baker shooting down to Coneal.  He was then arrested and charged with first-degree murder with a sentencing enhancement that the crime was committed to promote or further the activities of a criminal street gang.
During trial, the prosecution played to the jury five rap videos featuring Coneal and members of the Taliban gang.  The videos were made before Baker’s shooting and depicted Coneal and Taliban members bragging about violence they had committed or intended to commit.  Coneal uploaded five of the videos to YouTube, one in which he rapped, “I don’t know who baked the last cake.  All I know was the place got yellow taped.”
A gang expert at trial testified at length about the videos, interpreting the lyrics about numerous exhibits that were screenshots from the video.  The testimony was quite detailed.  Some of the lyrics, the expert testified, referred to the Baker killing.  The expert said gang members often use rap music to brag about real crimes that they committed.
Coneal himself testified that the lyrics were not connected to reality; he merely “wanted to look like a gangster so that someday” he might become a rapper.
The jury convicted Coneal of first-degree murder and the gang enhancement was found true.  He was then sentenced to life in prison without the possibility of parole.
Coneal then appealed the verdict to the First Appellate District Court of Appeal, arguing that the judge made a mistake in admitting such evidence into evidence at trial.
The First Appellate court agreed with Coneal (People v. Jerry Coneal (2019 DJDAR 10369)), stating that undue prejudice toward Coneal was created by the admission of the rap music lyrics that described violence as desirable and were relevant toward establishing gang involvement.  In this regard, the appellate court found that the trial court judge abused her discretion in admitting such rap videos.  However, the court rejected the People’s contention that the lyrics constituted admissions.
Moreover, the appellate court did not overturn the verdict, finding there was sufficient other evidence from witnesses to sustain Coneal’s conviction and any error in admitting the rap videos was harmless.
We present this summary of the reported decision to point out that had the appellate court agreed such rap music lyrics were unduly prejudicial and inflammatory as to the violence described and thus, defense counsel in the future should seek to exclude such lyrics and videos on the holdings in this case.
The citation for the Fourth Appellate District Court ruling discussed above is People v. Jerry Coneal (1st App. Dist., 2019) 41 Cal. App.5th 951, 254 Cal. Rptr. 3d 653.
For more information about evidentiary issues with social media postings, please click on the following articles:
Contact us.
Serving Torrance, Long Beach, Compton, Airport Courthouses and Other Courthouses.