Why This Article Matters: According the California Supreme Court, showing another person one’s gang tattoos cannot be considered a criminal threat even under circumstances where the message is clear because there is no verbal, written or electronic communication, as Penal Code § 422 requires.

The following article summarizes the California Supreme Court’s ruling on a criminal threats case we discussed in Article 429 after the Fourth Appellate District’s ruling.

In that ruling, the appellate court held that Mario Gonzalez could be held criminally liable for making criminal threats even if he never said or wrote anything, but made threatening gestures.

Mr. Gonzalez then appealed ruling to the California Supreme Court.  The court’s ruling began with the reminder of exactly how Penal Code § 422 is defined: it is a crime to threaten infliction of great bodily injury or death on another, “with the specific intent that the statement, made verbally, in writing, or by means of an electric communication device, is to be taken as a threat…” (Penal Code § 422(a)).

The court then briefly reviewed the facts.  In March, 2013, an off-duty Cathedral City police officer was at a restaurant in Indio.  As he was walking to the restroom, he saw a former high school female classmate.  He smiled at her briefly. 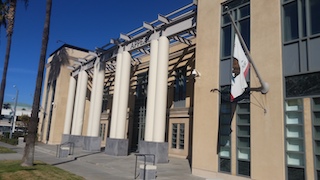 4th Appellate District Division 2 Riverside
After the off-duty police officer returned to his table, several of the male friends of the officer’s former classmate glared at the officer.  They then displayed gang tattoos to the officer.

The former classmate then left the restaurant with her male friends and, as they walked by, the men continued to stare menacingly.

The police officer was sitting at a booth next to a window that allowed the officer to see Mr. Gonzalez as he was getting into his car.  Mr. Gonzales could also see the officer.  Looking directly at the police officer, Gonzalez made the hand signal of “JT,” which was for the Jackson Terrance gang.  Gonzalez also simulated a pistol pointing upward, which the officer understood as a threat.  The driver of the car then ran his finger across his neck, made the JT symbol and simulated a pistol with hand gestures, too, and pointed his gun symbol at the officer.

Mr. Gonzalez was ordered to answer on five counts of making a criminal threat, one count for each person at the officer’s table in the restaurant.  Other allegations included gang enhancements and that Gonzalez had served three state prison priors (Penal Code §§ 186.22 (b)(1), 667.5(b)).

Mr. Gonzalez then appealed the court of appeal’s ruling to the California Supreme Court.

In People v. Mario Alberto Gonzalez (2017 DJDAR 5116, the California Supreme Court reversed the court of appeal, finding that hand gestures did not constitute a statement “made verbally.”  The Supreme Court noted that Penal Code § 422, as amended in 1998, reflected the Legislature’s intent to exclude nonverbal conduct.

The Supreme Court was quite methodical in noting that when criminal threats became a crime in 1988, it applied to ‘[a]ny person who willfully threatens to commit a crime which will result in death or great bodily injury to another person, with the specific intent that the statement is to be taken as a threat. . .”  At that time, section 422 did not define “statement,” but the Evidence Code defines the term as “(a) oral or written verbal expression; or (b) nonverbal conduct of a person intended by him as a substitute for oral or written verbal expression” (Evidence Code § 225).

In 1998, however, the Legislature amended 422 to make a statement include anything “made verbally, in writing, or by means of an electronic communication device.”  The amendment, at the time, was part of a bill intended to combat “cyberstalking.”

The Supreme Court rejected the People’s argument that Mr. Gonzalez’s multiple gestures were a “non-audible verbal threat,” and that the entirety of his conduct had to be considered.  The court acknowledged that defendant’s conduct could reasonably be construed as threatening.  “However, section 422 requires a specific type of threat, one made in the form of a statement made verbally, in writing, or by means of an electronic communication device.”

Here, Gonzalez’s conduct fell short of meeting the amended definition of a statement in Penal Code § 422.

Our office agrees with this ruling because were the court to find a statement based on the totality of the circumstances, courts will place themselves on a slippery slope of theoretically finding less and less suffices to constitute a statement.
The citation for the California Supreme Court ruling discussed above is People v. Mario Alberto Gonzalez (2017) 2 Cal.5th 1138, 218 Cal. Rptr. 3d 150, 394 P.3d 1074.