Our client, age 19, had bought some hot pink and baby blue brass knuckles in a Los Angeles China Town gift shop several years earlier when he was in high school.  He used them as a paper weight at home on his desk in his bedroom.
After graduating from high school, he went off to college on a full Army Reserve Officer Training Corps (ROTC) scholarship at a well-known Catholic university in Washington State.  He also played on the school’s varsity soccer team as a recruited player.
Over Thanksgiving break, he came back home to Los Angeles as a college freshman, eager to meet with his friends from high school and to catch up on their college experiences.  When he was there, he saw the pink and blue brass knuckles at home and decided to take them back up to college with him.  They looked “cool” and he thought he could use them as a paperweight up in his dorm room.
As he was passing through security at Los Angeles International Airport (LAX), he had the brass knuckles in his carry-on backpack.  The baggage screeners noticed them and he was stopped, asked about the item and issued a ticket for violation of California Penal Code § 21810, illegal possession of brass knuckles.  His brass knuckles were seized, but he was otherwise allowed to continue on his way.
Once he got on the flight, he looked at the ticket more closely and realized the offense was a misdemeanor and he had promised to appear in the Airport Superior Court on La Cienega Boulevard in late December, when he would be back in Los Angeles for Christmas break.  He looked up the charge on the Internet and realized punishment could include up to one year in county jail and a fine of up to $1,000.  He also saw that it could be charged as a felony (it was a “wobbler”) with up to three years in county jail.
He became somewhat worried and discussed the case with his parents.  They recommended that he contact an attorney, although they did so, too. 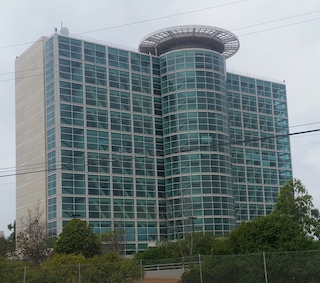 Airport Courthouse
Both the client and the client’s mom contacted Greg Hill & Associates the same day and each talked to Greg about the case, the client’s college commitments, his exemplary grades, his being a member of the school’s Army ROTC unit and resolving the case in a way that did not endanger his future.
Greg responded that he had handled such cases before, but cautioned that knowledge is the biggest defense, but the client apparently admitted to baggage handlers that he knew such brass knuckles were in his bag when they asked him about them.  Moreover, because the matter involved Los Angeles International Airport, it was viewed as more serious and the prosecution would not treat the same as if such brass knuckles were discovered in one’s car during a traffic stop along a street outside the airport.
Nonetheless, Greg did explain that due to the client’s youth, the color of the brass knuckles, his “All-American” college and being in Army ROTC, the prosecutor may be more lenient with him.  Greg then discussed an office hearing, diversion, a delayed entry of sentencing and delayed entry of plea possibilities.
Greg then recommended that the client send him his class schedule from college (to show he was a full-time student), anything that showed he was in Army ROTC, a resume and that he take an online weapons safety course through American Firearms Training.  Greg explained how he would then submit these documents to the Los Angeles City Attorney’s office with a request that the case be handled through an office hearing, rather than through a criminal filing.
The client, with his parents’ nagging, then provided our office with such documents and Greg submitted such documents to the Los Angeles City Attorney’s Office at the Airport Courthouse, requesting a no file, or in the alternative, an office hearing.
There was no response from the Los Angeles City Attorney’s Office in the following weeks leading up to the arraignment date.  Greg then appeared at the courthouse for the arraignment and was not able to find our client’s name on the listing of cases set for a hearing that day.  He first double-checked with the criminal clerks’ office about the no filing and the clerks there confirmed no case had been filed.
He then went upstairs to the Los Angeles City Attorneys office and inquired about the case.  The clerk there told Greg that the matter had been referred to an office hearing.
Greg shared this good news with his client and his parents, who were very happy indeed and thankful that they had provided Greg with the documentation he suggested and requested.  They were happy that Greg had requested the office hearing in advance and that the client would avoid even a record of the case having been filed.  He would preserve his spotless criminal history.
For more information about brass knuckles, an office hearing and case filing issues, please click on the following articles:
Contact us.
Serving Torrance, Long Beach, Compton, Airport Courthouses and Other Courthouses.