Home
Other Information
Criminal Defense Articles
What Is an Office Hearing? Is This Good? How Long Is It?

What Is an Office Hearing? Is This Good? How Long Is It?

In low-level misdemeanor cases, the Los Angeles City Attorney’s Office, as well as other local city prosecutors and some district attorney offices, will chose to conduct an informal office hearing to resolve a case, rather than have a criminal prosecution.  During the hearing, nothing is recorded (there is no court reporter) and the proceeding is confidential.  There is no judge.  It takes place in an attorney’s office.

The defendant typically has no prior criminal history and the alleged crime is minor, such as trespassing, disturbing the peace by yelling at a neighbor, minor vandalism or cases of domestic violence where there are no injuries.

Brief Synopsis: An office hearing is an informal meeting between the client, his defense counsel and a senior prosecutor to discuss the case facts, about how defendant accepts responsibility or ownership for his or her conduct and then, if the prosecutor seems satisfied with defendant’s attitude, the case is not filed.

Our office has had several low-level misdemeanor cases such as these referred to the LA City Attorney’s Office Hearing Program.  It is important to note that referral to such a program does not guarantee that the case will not be filed.  Instead, what happens is that a City Attorney talks to the defendant’s attorney and the defendant himself or herself (and in domestic violence or disturbing the peace cases, the alleged “victims”) and then makes a recommendation to her boss whether the case should be filed.

The program seems to be an attempt to decrease the caseload in our courts for those cases that need a factual discussion, but are not “crimes of the century.”  They need a bit more factual investigation, but the City Attorneys have a perception that the facts do not meet the standards to file a criminal case.  Having an attorney present to argue why the case has a defense should not be filed is important. 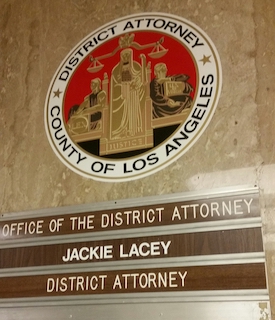 Los Angeles District Attorney's Office Door
For example, in a recent case our office handled involving trespassing over train tracks near the Downtown Los Angeles area, our clients simply never saw the “No Trespassing” sign and wandered over the train tracks.  Our clients were in their late 20’s and early 30’s and had no prior criminal history.  The clients were eager to say they never saw the signs and the City Attorney was equally eager to remind them to look for such signs, but not so eager as to cause a misdemeanor conviction which could have adverse employment consequences in the future.

In an alleged domestic violence case our office handled, the case was referred to an LA City Attorney Office Hearing.  Our client had been returning from a party with his wife, who had consumed far too much tequila.  Our client did not drink at all.  She was becoming combative and yelling loudly while they drove, so he pulled over at a public, well-lighted location and dropped her off.  She refused to get out of the car and so he pulled her out.  He then left her there and told her to walk home.  She instead called the police and claimed domestic violence.

The case was not filed, but it was no doubt one that the LA City Attorney’s office struggled with, as they candidly told us they thought it may very be filed.  Greg Hill had argued how there was never any criminal intent by our client to touch his client in an offensive manner, i.e. in anger.  The wife explained her side of the story, but her extreme intoxication and her own lengthy criminal history related to alcohol were most likely considered.  In the end, the case was not filed.