Our client, then 31, was in Los Angeles for a family wedding for a few days in 1998.  She had gone to the wedding and was heading back to Massachusetts, where she had lived since coming to the United States from the Cape Verde Islands as a little girl.
Before heading back to Massachusetts, however, she decided to buy some rock cocaine for herself.  She got information that she could buy some from a person who had an apartment off Palmwood Street, near the intersection of Palmwood and Buckingham streets in Los Angeles.
She headed to this location, not knowing it was under surveillance by the Los Angeles Police Department, who were watching anyone who came to this suspected drug dealer’s apartment.  This meant police watched our client’s every move as she walked up to the apartment at 4:50 a.m. to knock on the door.  An African American man in his thirties answered the door and police watched our client hand him something and in return, he pulled something out of his mouth and handed it to her.  She then put that item in her coat pocket and left, according to police. 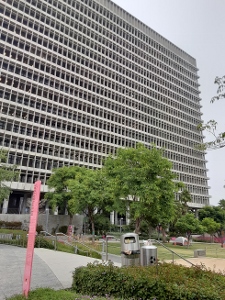 CCB Courthouse
Once she emerged from the apartment complex and stepped out onto the sidewalk, uniformed officers from the Los Angeles Police Department arrested her and took her to the 77th Precinct Station off Broadway Avenue in South Central Los Angeles.
Police described the substance in her jacket as a 0.18 grams of rock cocaine, but it was never tested to confirm this.  Our client told police that she was very ashamed of herself and that she had a flight back to Massachusetts the next day.  Nonetheless, police assigned her an arraignment date and let her go, never even having her sign a promise to appear or requiring her to post bail.
As might be expected, she did not fly back from Massachusetts for her arraignment in Los Angeles.  She was aware it was a felony and she was worried she would be convicted and go to jail.
Twenty-one years later, in 2019, she was advised by her attorney working on her U.S. citizenship that there was a bench warrant for her in Los Angeles that she needed to take care of ASAP.  The client then called Greg Hill & Associates and described the case facts.
Greg explained to the client that because the case was a felony, even if Prop 47 had changed it to a misdemeanor, she still needed to appear in court with him to have the bench warrant recalled, the case reduced to a misdemeanor and a plea bargain entered.  This was because in any felony, the client must appear in court herself or himself, or with counsel.  The judge wants to see the defendant in person.
However, Greg also mentioned that in two earlier cases involving similar facts, Greg had been able to discuss the case with the judge and the prosecutor and the judge kindly agreed to reduce the case to a misdemeanor first and then allow Greg’s appearance on the client’s behalf under Penal Code § 977(a).  The client then did not have to come to court.
Greg emphasized that this courtesy extended by the judge was unusual and could not be guaranteed at all.  The prosecutor and the judge had to allow an exception.
The client then told Greg that she was willing to retain Greg to try this in her case.  She had no other option, after all.
Greg therefore did appear in the Downtown Los Angeles Superior Court at 210 Temple, also known as the Clara Shortridge Foltz building, or CCB.  Greg had the court file retrieved from 1999 and the District Attorney also retrieved their file.
The court clerks and the District Attorney at first told Greg quite firmly that our client simply had to be present because the case was a felony.  Greg explained to the District Attorney that the case was actually a misdemeanor and that if the prosecutor agreed to the judge reducing the case to a misdemeanor, Greg would waive his client’s right to assert a violation of her right to a speedy trial (under the Sixth Amendment and Serna v. Superior Court).
Greg also showed the prosecutor our client’s electricity bill from Massachusetts and her Massachusetts driver’s license to show she really was 3,000 miles away.  Greg further explained that this case was holding up her immigration case.
The prosecutor then looked into the police report a little more and said he’d call his supervisor to ask if he could do what Greg proposed.  In fact, the prosecutor even proposed just dismissing the whole case if our client had no subsequent criminal record, which was true.
The supervisor then looked into the police report and agreed to just dismiss the case.  The DA then advised Greg what a lucky day his client just had.
The case was then called and the prosecutor announced to the court that it would be moving to dismiss the case in the interest of justice under Penal Code § 1385, which the judge granted.
For more information about bench warrants, Prop 47 and drug issues, please click on the following articles:
Our client was extremely happy.