Our client, age 19, and his girlfriend had a loud argument outside her Lakewood apartment in the early morning hours.  As the girlfriend reached for the keys to the apartment, held by our client, she yanked on the key and deeply cut her hand because our client held tightly to the key.  The girlfriend screamed in pain and the noise awoke the apartment manager, who quickly called the police.

In a Nutshell:  Bellflower, domestic violence between boyfriend and girlfriend, girlfriend cuts her hand while trying to grab her apartment key from her boyfriend; entire case dismissed on first day of trial.

The Lakewood Sheriffs arrived and immediately focused on our client, as he appeared to be a gang member.  They also saw the bloody hand of our client’s girlfriend.  They then toured the inside of the apartment and saw clothes all over the floor as if a fight had occurred.  In fact, no fight had taken place inside the apartment.  The girlfriend was just a messy person who did not fold her clothes and neatly put them away.

Our client was charged with misdemeanor violations of Penal Code § 273.5 (domestic violence), 243(e)(1) (battery upon a co-habitant or spouse) and 242 (simple battery).  While our client had no criminal convictions, his rap sheet showed nine arrests for felony charges and four other arrests for misdemeanor charges.  The history involved allegations of grand theft auto several times, felony aggravated assault, felony possession of an unregistered firearm and felony burglary, both commercial and residential.  In other words, there was a strong feeling within the courthouse of “now we got him.  He’s not going to slip away this time!  Now is time his comeuppance.”

Greg Hill met with the client and his girlfriend and picked apart the police report for all its inconsistencies.  He elicited a declaration from the girlfriend disputing many parts of the police report and, most importantly, pointed out that our client holding onto a key when his girlfriend pulled it away was not a battery at all.  While the Bellflower District Attorney bristled at this suggestion that the part of the case, the strongest part, was not a crime, she reluctantly agreed after Greg took the issue to her supervisor.

Greg then pointed out that if our client had really pushed his girlfriend to the concrete ground, her palms or at least her arms would have shown some injury.  The photographs taken by the police of the girlfriend, however, showed no injuries to support this.

Greg then also showed how our client could not have bruised his girlfriend’s arms because the photographs showed no bruises. 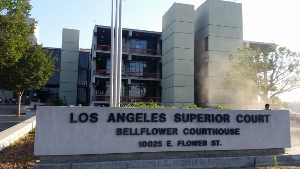 Bellflower Superior Courthouse
The District Attorney heard these arguments, but stated they would not dismiss the action.  They wanted our client in jail, they said, which Greg suspected was really more for his being able to wiggle out of so many earlier cases than for the crime at issue.

Consequently, Greg pushed to trial, reminding the District Attorney that the apartment manager explicitly stated in the police report that she saw no pushing or hitting.  Our client’s girlfriend also disappeared, discontinuing her cell phone number.

Greg then filed numerous motions in limine prior to trial asking the judge to issue an order excluding prior bad acts due to their unfair prejudicial effect being greater than their probative value for the case at issue.

On the first day set for trial, the prosecution asked for a resetting of the trial date, seeking to elicit a plea from our client.  We refused to plea to anything.

On the new day set for trial, the prosecution dismissed the case in the interest of justice under Penal Code § 1385.  Our client was very happy.

For more information common questions in a domestic violence case and a trial tax, click on the following articles:
Watch our Video about Domestic Violence by clicking here.