Our client, age 53 in 2017, went through a few tough months in 2012 and 2013 when her grandson was taken from his mom (our client’s daughter) and placed with a foster family by the Lakewood office of the Department of Children and Family Services (DCFS).

Our client considered herself the more appropriate placement for the child and was greatly upset by DCFS’ decision to favor a foster family over her.  She therefore launched a campaign of over one hundred lengthy e-mails, letters and phone messages expressing her displeasure in DCFS.  The focus of her communication was one particular DCFS employee.

What to Take Away:  Grandmother to a child sends over 100 lengthy, critical e-mails, long letters and rambling voicemails to a DCFS employee responsible for placing grandson with a foster family and not her.  Case dismissed on Sixth Amendment deprivation of speedy trial grounds.

The e-mails and letters never communicated a clear threat of imminent danger to the DCFS agent or the agent’s immediate family sufficient to constitute criminal threats under Penal Code § 422, but the emails, letters and voicemails did repeatedly state that what was done was cruel, insensitive and damaging.  Our client stated that the DCFS agent would “suffer in Hell” for what she did.  The e-mails further vowed that “karma” would “catch up” to the DCFS agent, who she described as callous, inhumane and evil.

This reference to karma was alarming enough to the DCFS agent that she notified her supervisor of her concern and the situation was considered for having police intervene.  A civil protective order was also considered, but not pursued.  The concern, most likely, was that our client would initiate or provide the “karma” in the form of violence to the DCFS agent.

The barrage of e-mails, letters and voicemails continued for approximately six months and then stopped in early 2013.  At that time, DCFS did contact the Lakewood Sheriffs, who recommended the filing of a criminal complaint for violation of Penal Code § 653m(b), annoying phone calls.
The Bellflower District Attorney’s office filed the misdemeanor complaint in July of 2013.  However, more than four years passed without our client being served with the complaint, arrested on a bench warrant (that was issued at that time) or otherwise given a chance to defend herself.

One day, however, in October of 2017, she was with her boyfriend and the two came in contact with a police officer over a traffic offense.  The officer “ran” our client’s driver’s license and advised her that there was a bench warrant for her at the Bellflower Courthouse.  The officer kindly asked our client to simply sign a promise to appear, instead of arresting her.

Our client then called our office, worried what might be awaiting her.  Greg and she discussed the facts of the case, as Greg got a copy of the docket report for the case.  Greg immediately commented that the judge might dismiss the case under Serna v. Superior Court (1985) 40 Cal.3d 239, as the four-year delay was presumed deprivation of our client’s right to a speedy trial under the Sixth Amendment, made applicable to the states under the Tenth Amendment.

Greg explained to the client that in a misdemeanor case, Serna held that when there was more than a one-year delay in prosecution, there was presumed prejudice to the defendant.  However, such prejudice was rebuttable by the prosecution if it could demonstrate due diligence in trying to serve defendant with the criminal complaint.  Greg further explained that if the client had moved outside the state or evaded process, the court would not find such a presumption.  In our client’s case, she had been living in the same location for the last ten years, so the police and the prosecutors certainly could have served her.

Greg then went to the Bellflower Courthouse on the client’s behalf (the client stayed at work) on the date our client promised to appear and had the bench warrant recalled.  Greg further indicated that he thought the case could be resolved through a Serna motion and the judge acknowledged that this may be true. 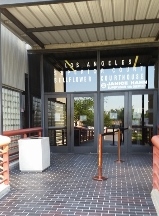 Entrance to the Bellflower Superior Courthouse
The prosecutor, however, requested 30 days to speak to the Lakewood Sheriffs to produce their documentation of due diligence in finding our client.  The judge allowed such a continuance for the prosecutor.

About a month later, Greg appeared in the Bellflower and the prosecutor stated that the Lakewood Sheriffs had no documentation of due diligence in notifying our client.

Greg therefore made an oral Serna motion, which the judge granted.  The client was extremely happy with this outcome because had she been required to answer the complaint, she surely would have been convicted, given the mountain of evidence.

For more information about annoying phone calls and criminal threats issues, as well as a Serna motion, please click on the following articles:
Contact us.
Serving Torrance, Long Beach, Compton, Airport Courthouses and Other Courthouses.