Our client, when age 27, went to a Hollywood bar with a few friends from work.  He worked at a social media company in Culver City.
The bar was packed with people and as he was returning from getting another drink at the bar, a stranger in the bar bumped into our client rather forcefully, causing our client to drop his drink.  The drink fell to the floor and the glass broke into many pieces.  The stranger yelled at our client for getting in his way when our client expected an apology and an offer to replace the spilled drink.  A bar employee then swept up the glass and mopped up the liquid on the floor.
Miffed, but not upset to the point of wanting to challenge the man to a fight, our client returned to the bar to buy another drink.  Our client then returned to his group of friends walking the same route.
As he passed by the stranger who had bumped into our client, the man laughed at our client, so our client stopped and asked him what he was laughing about.  The stranger then called him a racist term and told him he was stupid. 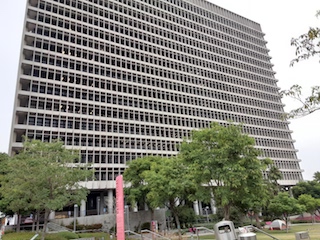 Clara Shortridge Foltz Courthouse
Our client then pushed the man backwards and a fight erupted.  Our client decked the other man, who was over six feet tall, while our client stood about five feet, six inches tall.  Our client ended the fight in about five seconds.  He knocked the other man out, cold.
Paramedics and the Los Angeles Police Department, Hollywood Division rushed to the bar.  Police then arrested our client on charges of violating Penal Code § 242, battery.  He then spent the night in jail and was released on his own recognizance the next morning after signing a promise to appear in the Clara Shortridge Foltz Criminal Courthouse in downtown Los Angeles in a about two months.
Our client had no prior criminal history, so this was a painful, shocking experience.  He was certain he would lose his job and be unable to obtain further employment with a criminal history.  He felt like all his hard work in college and as an employee was about to lead to a dead end.
Luckily for our client, the Los Angeles City Attorney handling the case understood the context of our client’s fight and offered our client formal diversion for one year on the battery charge.  Our client, using the public defender, was allowed to “earn a dismissal” by attending twenty-six anger management classes, perform twenty days of community labor and attend twenty-six Alcoholics Anonymous (AA) meetings.
The client dutifully performed all the community labor and attended 26 AA meetings, as well as 26 anger management classes.  The case was then dismissed in the interests of justice under Penal Code § 1385.
While the client was pleased with this, he knew his criminal history still showed that he was arrested for battery and that the case was dismissed.
He then heard about sealing and destroying the arrest report and court file.  He called Greg Hill & Associates and spoke with Greg Hill.  Greg explained how the new law, at Penal Code §§ 851.97 to 851.92, worked.  Greg explained that the law was not a total destruction of the arrest record, as that would remain available for law enforcement to review if our client ever applied for a job in law enforcement, but what the public could see of the arrest and court file would be deleted from his criminal history.  This also meant that if the client were to apply for a new job, his new employer would not see any record of the arrest.
The client then retained Greg Hill & Associates and we prepared the petition to seal and destroy the arrest record and all related court files.  We then filed the petition and served both the Los Angeles City Attorney and the Hollywood Division of the Los Angeles Police Department.  The petition included a declaration from the client wherein he described how he wanted the arrest record and court file sealed because he wanted to coach a youth basketball team at his local YMCA and apply for a better job.
The judge assigned to the case granted the petition, which made our client extremely happy.
For more information about sealing and destroying an arrest record and court file, please click on the following articles:
Contact us.
Serving Torrance, Long Beach, Compton, Airport Courthouses and Other Courthouses.