Are Medicine Side Effects Considered in Criminal Sentencing?

In today’s world, it is quite common for people to have prescriptions for a wide spectrum of psychological conditions.  For example, one may be medicated for anxiety, attention deficit hyperactivity disorder (ADHD), manic depression, depression, post-traumatic stress disorder (ADHD), as well as many other disorders.  The medications vary, but are often changed by doctors or medical insurance providers due to their expense.  Medications can also be changed in their dosage.

Summary in 50 Words or Less: The side effects of medication are often claimed to affect one’s mood or even awareness of what is happening.  When someone defends their conduct as being caused by the side effects of medication, judges are usually quite skeptical of this, so a criminal defense attorney must be careful in how to present this defense, as the following case summary exemplifies.

The side-effects of such medication, including a decrease in dosage, can impair one’s thoughts and thus, our clients often comment, their ability to form specific intentions.

When our clients describe this, they often will say, “I had no idea what I was doing,” or “Although I was at the bar, I thought I was at home with my girlfriend” or something similar.

When we hear this, we become curious if the client did anything else unusual after taking the medication, for example immediately before or after.  The client usually says nothing else abnormal happened; it was only the criminal conduct. 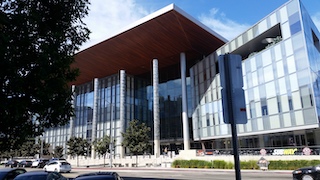 Long Beach Courthouse
In other words, for example, if the client is charged with shoplifting, we want to know if the client mistakenly went to McDonald’s to buy shoes or could not find the Macy’s where the crime took place, or the client shoplifted young boy’s clothing when she has no children or even nephews that the clothing would fit.

The following sex offense matter exemplifies an actual case where defendant claimed his Parkinson’s medication caused him to have increased sexual urges, resulting in him sodomizing, orally copulating and committing penetration of the victim’s vagina with a foreign object.

Defendant Gary Wayne Sperling was 68 years old and a professional masseuse.  He was hired to give massages to a young female with a developmental disability, Prader-Will syndrome, that caused her to have an insatiable appetite that had her on a strict diet of 850 calories per day.  Her IQ was measured at about 50.  Mr. Sperling was aware of the victim’s dietary restrictions.

During the massage, arranged by her caretaker each Saturday to reward her good behavior, Sperling would commit the above offenses, as well as other sexual conduct.  The “forbidden sweets” included donuts, Snickers candy bars and other candy.

Sperling claimed that as result of the Parkinson’s medication, “something snapped, and it could have happened with any other woman.”  He was indeed taking a high dose of the medication, Carbidopa-Levodopa.  Since the arrest, his dosage was reduced.

Sperling appealed the sentence, claiming the judge abused his discretion.

The Second Appellate District, in People v. Gary Wayne Sperling (2017 DJDAR 5475), upheld the eight-year sentence, even commenting that Sperling “is fortunate that he was not sentenced to the maximum ten-year term.”

The appellate court noted that the victim was twenty-five years old, blond, petite and “looks and acts like a child.”  The appellate court cited to the probation officer’s report, which stated, ‘[h]e clearly preyed upon the victim because of her illness and carefully planned his abuse.  He earned her trust and used sweets . . . to get her to comply with his sexual acts . . . as a result, he is not deserving of any other sentence, but the maximum of ten years in prison (i.e. the upper term of eight years on counts, plus a consecutive term of two years on count 4).”

The appellate court then cited to the prosecutor’s statement that recommended the mid-term of six years on count 1 (sodomy) and two years on count 4 (oral copulation).

Lastly, the appellate court noted that a trial court did not abuse its discretion unless its decision is so irrational or arbitrary that no reasonable person could agree with it.  People v. Carmony (2004) 33 Cal. 4th 367, 377.

Here, the appellate court found the trial court’s sentence extremely reasonable, if not too reasonable or even unduly lenient.

We write this article to show an example of how the case facts must preponderate in the analysis first and foremost.  Rarely, we find, do medical issues affect the primary analysis of the case.  They are secondary, it considered seriously at all.
The citation for the Second Appellate District Court ruling discussed above is People v. Gary Wayne Sperling (2d App. Dist., 2017) 12 Cal.App.5th 1094, 219 Cal. Rptr. 3d 570.
For more information about mental issues, please click on the following articles:
Contact us.
Serving Torrance, Long Beach, Compton, Airport Courthouses and Other Courthouses.