In all criminal cases, writings must be shown to be what they seem to say.  This means that to be admissible, a writing must be found authentic, or genuine.  In lawyer-speak, “authentication” is the term used to describe the requirement that the party seeking to admit a document for the court and/or jury to consider must show it is genuine and thus trustworthy for consideration.

Synopsis:  Anonymous 9-1-1 Call Regarding a Residential Burglary Admitted into Evidence In Torrance Superior Court Case Without Any Party to the Call Authenticating the Recording.

Authentication of a document can be accomplished by the author’s testimony, circumstantial evidence and statutory presumption.  People v. Goldsmith (2014) 59 Cal. 4th 258, 266.  Most often, it is the author testifying that he created the writing and recalls doing so.
An audio recording is defined by the California Evidence Code as a writing (Evidence Code § 250), so a 9-1-1 call record must be authenticated.
The Torrance Superior Court case of People v. Rodney Lashawn Dawkins provides a good example of how a 9-1-1 call may be authenticated if the caller is anonymous and the dispatch operator fielding the call is unavailable. 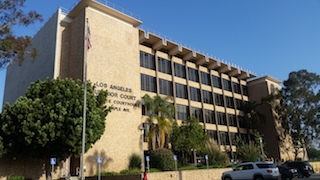 Torrance Courthouse
On June 15, 2012, an anonymous caller telephoned the local 9-1-1 operator to report a burglary in process next door to her.  Los Angeles Sheriff’s Deputies responded immediately while the 9-1-1 operator continued speaking to the anonymous caller.  The caller described the burglar as African-American, about 30 to 40 years old and wearing blue jeans and a gray shirt.
While the 9-1-1 call continued, the police exited their vehicle and entered the apartment that the caller described as being burglarized.  The officers noted that the door appeared to have been broken open by force.  They found no one in the apartment and turned around, exiting the apartment.
The 9-1-1 caller, still on the phone, then described the burglar and deputies saw a man fitting the description and carrying a black duffel bag.
As the man appeared, the apartment owner appeared and saw the man holding the bag, which she identified as her own.
The police then detained the man and opened the bag.  The apartment owner identified its contents as her own.  There were ten items of women’s clothing, two electronic gaming sticks and a framed photograph of a graduation certificate of the apartment owner’s daughter.  The police then arrested the man, identified as Mr. Dawkins.  He was wearing blue jeans and a gray shirt.  He was African American, about 40 years old, and there were no other African American men in the vicinity.  The 9-1-1 caller’s credibility thus seemed good.
The police then asked Dawkins if he had been inside the apartment and he admitted being inside, explaining that the owner knew him and suggesting she consented.  Later, the owner of the apartment found a crow bar inside her apartment.
Months later, trial proceeded in the Torrance Superior Court.  The prosecution played the 9-1-1 tape to the jury.  The caller described the burglar as African American and wearing a gray shirt (The booking photo of Mr. Dawkins showed him in a gray shirt and another photo in blue jeans).  She also described the burglar as trying to enter a second floor apartment while using a large tool, possibly a large kitchen knife, to open the door.  She then described the burglar leaving with a black duffel bag.
The 9-1-1 operator could be heard on the recording played in court talking to the police officer at the scene while talking to the 9-1-1 caller.  The caller could hear the operator passing the information to the police, even correcting the operator so the police had a correct identification of the suspect.
At trial, the 9-1-1 dispatch operator was not called by the prosecution to authenticate he conversation between her and the anonymous 9-1-1 caller, who the police incidentally never found.  Instead, the prosecution introduced Deputy Jimenez, a 15- year veteran of the Los Angeles County Sheriff’s Department. He testified to how the 9-1-1 call was downloaded onto a computer and then how he replayed it and why he thought it was an authentic recording of the call, based on the LASD’S recording system.
Judge Honeycutt, the trial judge, admitted the 9-1-1 call into evidence based on Deputy Jimenez’s testimony.  The jury then did convict Dawkins and he was sentenced to fourteen years in state prison.  The sentence included a double midterm of four years, or eight years, because Dawkins had a prior strike conviction.  It was then enhanced by five years more because he had  a prior serious felony and one more year due to a prior prison sentence.
Dawkins appealed the admission of the 911 tape to the Second Appellate Division.  In People v. Rodney Lashawn Dawkins (2014 DJDAR 14285), the appellate court affirmed Judge Honeycutt, finding that the authentication of the recording was proper because the defense did have the opportunity to cross-examine Officer Jimenez concerning his knowledge of the computer system at the Los Angeles Sheriff’s Department, i.e. how calls were downloaded and saved.  Moreover, circumstantial evidence seemed to corroborate the caller’s description of events.
The judgment was therefore affirmed.
The citation for the Second District Court of Appeals ruling discussed above is People v. Rodney Lashawn Dawkins (2d Appp. Dist., 2014) 230 Cal.App.4th 991, 179 Cal.Rptr.3d 101.
For more information about the issues in this case, click on the following articles:
Contact us.
Serving Torrance, Long Beach, Compton, Airport Courthouses and Other Courthouses.