Home
Other Information
Criminal Defense Articles
According to the NHTSA, What Type of Driving is DUI?

According to the NHTSA, What Type of Driving is DUI?

While the Fourth Amendment does permit brief investigative stops when a law enforcement officer has a “particularized and objective basis for suspecting the particular person stopped of criminal activity,” a police officer may not make such a stop based on a mere hunch.  A hunch does not create a reasonable suspicion.  Terry v. Ohio (1968) 392 U.S. 1, 21-22.

The Gist of this Article: The following article lists the top 20 types of driving and top 15 types of motorcycle driving that are cues of drunk driving (speeding is not one) as determined by the National Highway Safety Administration (NHTSA).  It is an interesting list, so enjoy this article.

Indeed, an officer may stop and detain a motorist only when that officer has a reasonable and articulable suspicion that the driver has violated the law.  Ornelas v. United States (1996) 517 U.S. 690, 693, 134 L. Ed. 2d 911, 116 S. Ct. 1657; People v. Superior Court (Simon) (1972) 7 Cal.3d. 186, 200, 101 Cal. Rptr. 837, 496 P.2d 1205.
Some may say that California law has been even more protective of a person driving a car.  In People v. Mead (1954) 126 Cal.App.2d 164, 271 P.2d619, the Third Appellate District Court of Appeal held that police must witness impairment in one’s driving to an “appreciable degree” to make a traffic stop.
So, what types of impairment are police officers taught could create reasonable suspicion of DUI?
The National Highway Traffic Safety Administration has studied this extensively over the years and has arrived at lists of the top 20 cues exhibited by automobile drivers and the top 14 cues exhibited by motorcycle drivers. 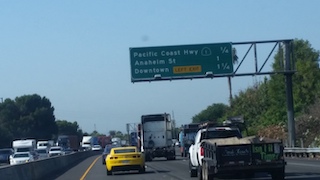 Cars on the 710 Freeway
The top 20 cues for DUI in automobile drivers are:
We note that speeding is not considered one of the top twenty cues for DUI for an automobile, as determined by the NHTSA.
The top 14 cues for DUI in a motorcycle driver are:
Speeding by a motorcyclist certainly could be characterized by recklessness, but we feel it is significant that speeding is not specifically listed as a cue for DUI here for motorcyclists, either.
When an attorney is arguing a motion to suppress for an improper traffic stop in a DUI for a reason not listed above, we find it effective to ask the officer if such a reason is one of the top 20 or top 14 cues for DUI and then list them out to show that the officer lacked reasonable suspicion of DUI, but instead suspected DUI based on a hunch, i.e., it was 2:20 a.m., or our client was seen driving away from a bar or restaurant after closing time, neither of which are proper grounds for a traffic stop.
For more information about traffic stops in general, please click on the following articles:
Contact us.
Serving Torrance, Long Beach, Compton, Airport Courthouses and Other Courthouses.