Beginning October 1, 2019, California will embark upon a new system of post-arrest treatment of anyone detained by police on suspicion of having committed a crime.
The stated purpose of Senate Bill 10 (SB 10) is to eliminate cash bail in California to “treat rich and poor alike” by doing away with a system where the rich could pay a bail bondsman to be released (or even post the full amount of bail as collateral) while those less wealthy and who could not post a bail bond would remain in custody.  While this intent is laudatory, we believe that the new system will have the effect of allowing those with proactive, assertive counsel the ability to dramatically effect release of those clients held for a felony or those held for a misdemeanor that falls within one of the eleven exceptions to release.

About This Article Briefly: Eliminating money bail means defense attorneys must immediately (within hours) provide information about the good character, employment and family status of an arrestee who may be denied release from jail by the probation department in their “pretrial risk assessment” of the arrestee.

Senate Bill 10 adds Chapter 1.5, “Pretrial Custody Status” to Title 10 of the Penal Code, setting forth a new system of “pretrial risk assessment” (defined at Penal Code § 1320.7) that classify suspects not released automatically as “low risk,” “medium risk” or “high risk” based on an algorithm that will assign a “risk score” that will numerically value a person’s criminal history, history of not appearing in court, the crime for which the suspect is held and many other factors.
No one arrested for a misdemeanor will be subject to this risk assessment requirement unless that person falls into one of the eleven exceptions to automatic misdemeanor release.
This risk score is supposed to be calculated within 24 to 36 hours of when a person is booked.  No one will be released until this score is determined.  After it is determined, low and medium risk arrestees may be released prior to seeing a judge.  No one with a high-risk score will be released. 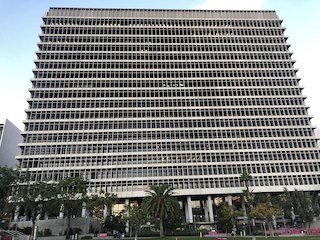 CCB Courthouse
The risk assessment score, in a way, replaces bail: low risk is like low or no bail, medium risk may lead to own recognizance release prior to the arraignment or at arraignment, but with requirements to attend Alcoholics Anonymous (AA) classes, anger management classes, wear a GPS tracking device, etc.
Government Code § 27771(a)(9) tasks the probation department with providing “Pretrial Assessment Services.”  This will be a person or group of people within the probation department tasked with determining “the risk of a person’s failure to appear in court” or “risk to public safety” is a suspect is released before the arraignment or even post-arraignment but before the case is resolved.
In other words, probation officers will have tremendous power and discretion to control whether a person is released.  As we know with STATIC 99R reports, for example, such numerical scores are only a measure of past history and cannot properly quantify certain factors.  There are just too many variables to neatly quantify a person’s public safety risk or likelihood of appearing in court.
This is why we believe it is critical that quality, assertive and active criminal defense attorneys who communicate immediately with the appropriate Pretrial Assessment Services personnel within the probation department can make a significant difference.  If the probation department is aware of the history of the client, that person may be released for a low to medium level felony rather than held.  The client can consequently keep his or her job or care for a sick family member.  The person detained may be able to then work with his or her attorney to develop a solid defense, rather than languish in a jail cell.
Likewise, if the probation department has inaccurate information, i.e. that one of the eleven exceptions to immediate release for a misdemeanor applies when in fact it does not, it is critical that defense counsel bring this to the probation department’s attention immediately, or at the least, at the arraignment.  This could mean showing the probation department that the pending misdemeanor DUI is really not the client’s third DUI or that the blood alcohol level cannot be considered above 0.20% for several reasons.
If the Pretrial Assessment Services report and risk score therein is above the limit for immediate release, defense counsel must be ready to propose release of the client with, for example, a SCRAM monitor, or daily AA meetings (and counsel should be prepared to provide the judge with the specific address and meeting hours available for the client), or even enrollment in an SB38 program (again, providing the specific program provider and address, too).
Ironically, such active defense counsel will only be retained by suspects with the ability to pay such counsel for such triage type work, meaning the system will favor the rich and penalize the poor.
For more information about how eliminating money bail will affect California, please click on the following articles:
Contact us.
Serving Torrance, Long Beach, Compton, Airport Courthouses and Other Courthouses.