Home
Other Information
Criminal Defense Articles
What Will California’s Elimination of Money Bail Do?

What Will California’s Elimination of Money Bail Do?

The passage of SB10 into law is seen by many with quite a bit of skepticism.  While treating both rich and poor alike by eliminating money bail is laudable, how does the new law work otherwise?
The answer depends principally on whether one is arrested for a misdemeanor or a felony.

The Reader’s Digest Version: Elimination of money bail will have a myriad of both good and bad effects so numerous that even predicting all of them right now may be both premature and inaccurate.  However, there are significant concerns that abolishing money bail have many negative effects as this article describes.

If one is arrested for a misdemeanor offense, the general rule is that the person will be assigned a date to appear in court, sign a promise to so appear and be released within twelve hours of being booked.
However, there are certain exceptions to this rule.  There are thirteen specified exceptions to this general “catch and release” policy under Penal Code § 1320.10(e).  Those who will be held for a further review by Pretrial Assessment Services (PAS) for release are those people arrested for:
The PAS review is supposed to be done within 24 hours of one being booked.  Its purpose is to gather history on the person’s likelihood of returning to court and the public safety risk of the person, if released.  The investigation will review the person’s criminal history, failures to appear in court in the past and the seriousness of the crime alleged. 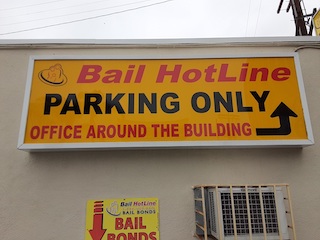 Bail Bonds
Everyone charged with a felony will also undergo a PAS.
The PAS investigation will then categorize the detainee as low risk, medium risk or high risk.
If the PAS investigation determines someone is high risk, the person will remain in custody until his or her arraignment.
If the PAS investigation categorizes a suspected felon as low or even medium risk, but none of the 13 exceptions to immediate release for a misdemeanant apply, the person will be evaluated for four additional felony exceptions to bar release.  They are:
1.    The person has a pending trial or sentencing on a felony matter;

2.    The person was arrested for a felony with elements of physical violence, threat of violence or likelihood of great bodily injury (GBI);

3.    The person was arrested for a felony in which he or she was personally armed or personally used a deadly weapon or a firearm; or

4.    The person was arrested for a felony wherein he or she inflicted GBI.
If none of the 13 misdemeanor and none of the four felony exceptions apply, that person may be released on his own recognizance (OR) or remain detained until the arraignment.
At the arraignment, the judge can then condition release upon certain conditions meant to promote public safety and/or keep track of the individual.  This is called a Court Pre-Arraignment Review hearing.
In deciding one’s flight risk, the judge will certainly evaluate whether the person is employed, if the person is a U.S. citizen, whether the person’s immediate family is located locally and whether the person has a history of not appearing in court when ordered (by looking at the person’s history of bench warrants).  This is when the disparity between rich and poor will often benefit the wealthier defendant and hurt the poorer defendant who may not be employed, may not be a U.S. citizen and who may have a criminal history and history of bench warrants.
The second area of evaluation is the public safety risk that the individual would pose if released.  This is often misunderstood by both judges and attorneys.  The evaluation should include a review of the person’s criminal history, the facts of the crime at issue, the proximity of the victim to the accused and likelihood that the person will reoffend if released.
Preventative measures such as having the accused wear a GPS monitor (some of which are notoriously inaccurate), a drug or alcohol sensor, attending classes and regularly checking in with a probation office may help ensure public safety but generally cannot prevent a determined criminal from reoffending if this is his or her intent.
For more information about bench warrants, bail review hearings and , please click on the following articles:
Contact us.
Serving Torrance, Long Beach, Compton, Airport Courthouses and Other Courthouses.