Home
Other Information
Criminal Defense Articles
When Would Having a Small Wooden Bat Be a Crime (PC 22210)?

If one has been to a Dodger or Angel game when the team hands out small wooden replica bats to anyone who enters the stadium with a ticket, one is familiar with the approximately 18-inch long bat that young children treasure.
It is meant to be a toy.  However, can mere possession of it be illegal?  If so, under what circumstances?  Does one have to intend to use it as a weapon?  Are the Dodgers and the Angels creating thousands of criminal cases by handing out such souvenirs?

About This Article Briefly: Penal Code § 22210, illegal possession of a billy club, makes it illegal to have a small bat, such as ones sold as souvenirs at Dodger and Angels games, when its possession is as a weapon, even for self-defense, in light of all the conditions of its possession.

This issue arose in the recent case of Corey Baugh, who was convicted by a jury in Contra Costa Superior Court of violating Penal Code § 22210, possessing a billy club.  Baugh appealed the verdict, arguing that the trial judge there made a mistake by instructing the jury that possessing a billy club does not require the prosecutor to prove he intended to use it as a weapon.
The underlying facts are important to understand.  Baugh was pulled over late one evening for having an inoperable headlight on a Chevy Cavalier.
He was driving a friend’s car, allegedly with the friend’s permission.  One of the police officers making the stop was able to see a .22 caliber round in the center console coin tray.  He also noticed that the car’s ignition switch was worn out. 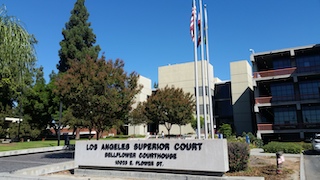 Bellflower Courthouse
Suspecting a vehicle theft, the police officer ordered Baugh out of the car and began a search of the car.  Wedged between the driver’s seat and the center console to the right was a small wooden bat.  The officer also found two bags of .22 caliber ammunition under the driver’s seat and a loaded .22 caliber rifle disguised as a baseball bat protruding from the trunk.  At that point, Baugh was arrested.
While being transported to the jail, Baugh commented to the police officers, apparently in an attempt to explain the ammunition and rifle, that he had been jumped and beat up three weeks earlier.
Baugh had a prior strike for assault with a deadly weapon, so his possession of the ammunition and the firearm was illegal.
When asked why he had the small wooden bat, Baugh explained to police that it was a “tire thumper” used in his work as a commercial truck driver.
He explained how he would test the tire pressure of his tires as part of a safety inspection of his rig.  He described how when he thumped the tires with the bat, the tires would make a particular sound that indicated if they were safe.  He explained that he kept the bat with him in a Chevy Cavalier, he told the officer that he took his tools with him when he left the truck.
The People argued that this version of events was implausible because Baugh was not employed as a commercial driver on a regular basis.  Instead, Baugh had the wooden bat for self-defense, as his first comments to the police about being recently jumped revealed and was why he had the bat within easy reach from the driver’s seat.
The jury then accepted the People’s view of the evidence and convicted Baugh.  The judge then sentenced Baugh to three years of formal probation.
In Baugh’s appeal to the First Appellate District, the court looked to the jury instruction that told the jury defendant was guilty of violating § 22210 if “defendant possessed the billy for a weapon . . . In considering this, consider all the surrounding circumstances . . . including when and where the object was possessed . . .”
In deciding whether this instruction was proper, the appellate court reviewed People v. Grubb (1965) 63 Cal.2d 614, at 620-621, fn. 9, which dealt with a broken baseball bat used as a billy club.  In Grubb, defendant admitted that he kept the broken bat for self-defense and was thus not being kept for a legal purpose.
While Grubb was ultimately exonerated based on an illegal post-arrest confession elicited in violation of his right to counsel, the earlier ruling on illegal possession of the broken bat remained valid law, so here, Baugh’s conviction was upheld and his appeal was denied.
The citation for the First Appellate District Court ruling discussed above is People v. Corey Baugh (1st App. Dist., 2018) 20 Cal.App.5th 438.
For more information about illegal possession of a firearm or certain weapons, please click on the following articles:
Contact us.
Serving Torrance, Long Beach, Compton, Airport Courthouses and Other Courthouses.