Home
Other Information
Criminal Defense Articles
What’re the Phases of a Misdemeanor Case? What Happens When?

What’re the Phases of a Misdemeanor Case? What Happens When?

For anyone who has never faced a criminal case, the sequence of events in a misdemeanor case can be confusing and sometimes, counterintuitive.  Television and movies often deal with felony cases and the portrayal of how things proceed is often misleading or just wrong.

The Reader’s Digest Version: The general sequence of a misdemeanor case is arraignment, pre-trial hearings and trial.  Counsel for defendant also will attempt to negotiate a plea bargain as appropriate and will file motion(s) that are legally supported and helpful toward resolution and narrowing the issues.

Every criminal case begins with some police contact with the accused or some investigation of the accused.  When the accused is arrested, an arraignment must follow within 48 hours (not including weekends and holidays) unless the accused is released on his or her own recognizance (OR) or the accused posts bail as collateral to a promise to appear in court on some future date. 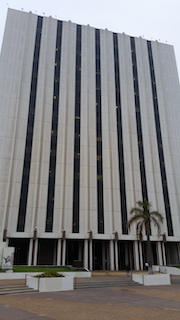 Compton Courthouse
The arraignment is a hearing wherein the accused is told or informed (by reading) the allegations against him and asked to enter a plea of not guilty, guilty or no contest.  The arraignment is also the time when the prosecutor provides defense counsel with the police report, in whole or in part, videos (the “dash cam,” the body-cams, store security films, i.e., if they exist), audio recordings (i.e. a 911 call or a witness interview), photographs (including booking photographs), supplemental reports, the dispatch log and the criminal history of the defendant.  There also may be chemical testing results, i.e. laboratory results or a blood alcohol test results, either from breath or blood.  All these documents about the case facts are collectively termed “discovery.”

The arraignment is also when the prosecution may convey a plea bargain.  The judge may also review the conditions of OR release or bail (the judge can increase bail or decrease it).  When the case involves domestic violence, the arraignment can be the time to request that the protective order allow peaceful contact (Level One) between the defendant and the victim, i.e. if the two are spouses or otherwise live together.

If the case does not resolve at the arraignment, the judge will usually set a pre-trial hearing next and may specify a future date for trial.

A pre-trial hearing is usually a few weeks after the arraignment, especially if the client is out of custody (if the client remains in custody, the pre-trial may be in just a few days).  The pre-trial hearing is meant for the prosecution and defense counsel to discuss the issues, exchange discovery (defense counsel may have a video or documents to provide the prosecution), plea bargain and discuss going to trial.

It is not unusual for there to be several pre-trial hearings, wherein defendant may seek the judge’s ruling on a motion of some type.  This may be a motion to suppress evidence that was unlawfully obtained, a motion for civil compromise to dismiss the case, a motion for a line-up, a motion for appointment of an expert, a motion for a blood split analysis, a motion for judicial diversion (in Los Angeles County only), a motion for discovery or a non-statutory motion to dismiss.  There are many other types of motions, but these are some of the more common misdemeanor motions.

Defense counsel may also prepare and deliver a Defense Position Letter with a Mitigation Packet to request a certain plea bargain, by arguing the law, the facts and showing that the client is a “Good Guy” or “Good Gal.”  Such a letter may include showing the prosecutor that our client attended a certain number of classes or Alcoholics Anonymous (AA) or Narcotics Anonymous (NA) meetings, has a professional license, has immigration issues or has an alibi for the time of the alleged crime.

If no plea bargain can be reached and pleading in the open is not a viable option, the only remaining path to take is to proceed to trial, either with a jury or just to the judge (a bench trial).