What Standard Applies to Renew a Restraining Order?

A civil restraining order is often used to prevent criminal conduct such as battery, criminal threats, stalking or just disturbing the peace.  It is not issued in a criminal court, but it has criminal undertones that suggest if the restraining order is violated, not only would a criminal case follow for violation of the order (under Penal Code § 166(a)), but also for the conduct, if prohibited under the Penal Code.
For this reason, we often have clients who are the subject of a restraining order and who call us to better understand the limits of their freedom imposed by the order and whether the order is automatically renewed upon its expiration and/or what the protected party must show a judge to renew the order.

The Gist of this Article: To renew a civil restraining order, one must show “reasonable apprehension of future abuse.”   The order is not automatically renewed.  Instead, the person to be protected must show a need for the order to continue or be extended.

The following downtown Los Angeles court decision, appealed to the Second Appellate District in downtown Los Angeles, exemplifies what standard is proper for renewing a civil elder adult or dependent adult restraining order.
The need for the order arose after Gordon B., a then-75 year-old disabled veteran appeared as a witness at two animal control hearings in June and October, 2014.  Gordon B. lived alone.
Soon after his appearance at the two hearings, five persons involved in those hearings began to harass him through vandalism of his personal property, verbal abuse and obscene gestures whenever he left his house.  One neighbor, Gomez, was one of those persons involved at the hearing and, allegedly, Gomez tried to run him over with his Ford pickup truck and on another day, three days after July 4, 2015, he set off a large number of firecrackers on Gordon B.’s driveway to terrorize him. 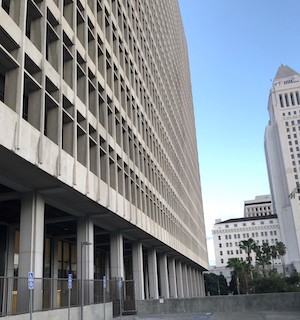 CCB Courthouse
Three days later, on July 10, 2015, Gordon B. obtained elder adult or dependent adult temporary restraining orders against all five of his harassers under Welfare & Institutions Code § 15657.03.  Of the five subjects to be restrained, only three of the folks were served.  On July 31, the date for hearing on permanent restraining orders to be issued (up to five years), the judge (Carol Boas Gordon) was advised of the service difficulties and continued the hearing for another three weeks to allow Gordon B. to serve the two then unserved parties.
On the next hearing date three weeks later, Judge Boas issued a one-year “stay away” restraining order in favor of Gordon B. and against some of the five parties Gordon B. identified as his harassers.
Just prior to the order expiring a year later, Gordon B. went to court to have the order renewed, as he allegedly had called the police several times during the last year to enforce the restraining order.  In one of the incidents, Gomez drove by Gordon B.’s house and looked at him “in a threatening manner.”  In another situation, Gomez apparently tried to run over Gordon B. with his car again, but Gordon B. could not tell the judge the exact date of the incident.  Gordon B. also had his car tired slashed, but he could not identify the perpetrator.  Lastly, on July 4, 2016, Gordon B. saw Gomez ignite “large, military grade firecrackers” on his front lawn and driveway.
The judge seemed to discount the anxiety that Gordon B. apparently continued to feel about the restrained people, stating “the fact is that, as I explained to you before, it’s hard to get a renewal and it’s hard to get enforcement unless there is a significant threat, a reasonable threat or an act of violence.”
Gordon B.’s counsel stated that his client has a fear that once the restraining order is no longer in place, the behavior of Gomez and the other parties was going to go back to what it was.
Judge Goodson rejected these concerns as speculative, said his evidence was insufficient for renewal and suggested Gordon B. install security cameras.
Gordon B. then appealed to the Second Appellate District in Gordon B. v. Sergio Alberto Gomez (2018 DJDAR 3206).  The appellate court reversed the lower court and remanded (sent back) the case back to the trial court with instructions to consider if Gordon B. had proven reasonable apprehension of future abuse by Sergio Alberto Gomez.
The citation for the Second Appellate District Court ruling discussed above is Gordon B. v. Sergio Alberto Gomez (2d App. Dist., 2018) 22 Cal.App.5th 92.
For more information about criminal restraining orders (the article above was about a civil restraining order), please click on the following articles:
Contact us.
Serving Torrance, Long Beach, Compton, Airport Courthouses and Other Courthouses.