Home
Other Information
Criminal Defense Articles
What Punishment for Driving without a Valid License?

What Punishment for Driving without a Valid License?

One of the most common, yet most misunderstood, offenses that our clients face is driving without a valid license.  The charge is often part of a DUI or drug related offense when drugs are found after a traffic stop.

Why This Article Matters:  The best way to get a driving without a valid license charge dismissed or reduced to an infraction is to go get a license and bring it to court to show the judge and/or the prosecutor.

This is a charge that, while it often is reduced to an infraction, still merits careful attention.  As the charge is often derivative of a DUI or drug offense predicated on a traffic stop, it is smart to look closely at the traffic stop for its legality.  If the traffic stop is illegal, the evidence of one’s license being expired may not inadmissible.  This principle is known as the “fruit of the poisonous tree,” wherein the fruit is the evidence of one driving without a valid license and the poisonous tree is the illegal traffic stop, which led to the discovery of the license status.

When the traffic stop is improper, our office will file a Motion to Suppress Evidence, specifically any evidence gathered following the traffic stop.  This motion is bought under Penal Code § 1538.5.  It leads to a hearing wherein the police officer who made the stop must testify to defend his or her traffic stop as proper.  If the motion is granted, the case is dismissed. 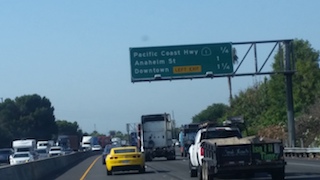 Cars on the 710 Freeway
Dismissal of this charge is often highly coveted because the client cannot obtain a valid license.  The client may also be driving on a suspended licensed due to a DUI conviction.  Or the client may not be able to obtain a license because he or she has excessive points with the DMV due to accumulated traffic offenses or an outstanding warrant in another case.
If the client can produce a valid license at the arraignment, the prosecution may dismiss the case or condition dismissal upon payment of a small fine or community service.  The prosecution may also agree to reduce the charge to an infraction.  An infraction is also desirable there is no probation associated with an infraction.

When the client simply cannot obtain a license or the client has a lengthy criminal history and/or poor driving record, he or she may be forced to either take the matter to trial or accept a plea bargain.

If one is convicted of violating Vehicle Code § 12500, which is usually easy to prove for a prosecutor, the client faces a maximum $1,000 fine, plus penalties and assessments, up to six months in the county jail, an impound of one’s car and up to three years of summary, or informal, probation.  Our office has never seen such terms all applied in a 12500 case.

In short, driving without a valid license is the type of charge that must be approached in a proactive, aggressive manner.  It is the kind of charge that is often dismissal if one is aware of how to do so and willing to challenge the traffic stop.