Home
Other Information
Criminal Defense Articles
What Is the Status on Legalizing Pot in the South Bay?

What Is the Status on Legalizing Pot in the South Bay?

As of October, 2017, what is the status in the various cities in the South Bay of Los Angeles for allowing recreational marijuana sales, deliveries and growing?  After all, it has now been almost a year since California voters passed the Adult Use of Marijuana Act (AUMA) also known as Prop 64.  Why is not there a recreational marijuana store on every street corner, like a Starbucks or 7-Eleven?

In a Nutshell:  For most cities in the South Bay, the city has its own regulations and licensing requirements concerning growing marijuana in one’s home or on one’s property (including outdoors), as well as strict rules on sales of marijuana and the delivery of the product.  If one is interested in such businesses, we recommend you consult with the city hall for the area to ensure compliance with such regulation and licensing requirements to avoid raids and being shut down later, potentially facing criminal prosecution and losing significant money.

The reason is because under the AUMA, cities were given until January 1, 2018 to develop restrictions on home growing (cultivating), requiring permits and inspection protocols for businesses within each city seeking to sell recreational marijuana (as compared to medicinal marijuana) and deliver the product.  If a city did not develop its own regulations, state regulations would control.
Under state regulations, a license to sell recreational marijuana would be required, but the local cities would control whether to allow on-site consumption, i.e. in a coffee-shop type arrangement.
Cities understandably had an interest in regulating and taxing the business, both to control associated crime that was documented around medicinal marijuana dispensaries and to reap the rewards of sales and property taxes that the businesses were predicted to provide. 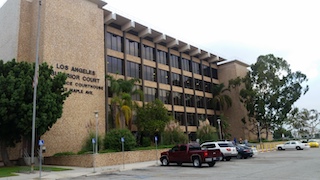 Torrance Courthouse
In a Friday, October 20, 2017 article in the Daily Breeze, Megan Barnes summarized this for Daily Breeze readers.  Mr. Barnes did a thorough job, reporting that Manhattan Beach, Redondo Beach and Torrance had recently passed laws banning the sale of recreational (adult use) marijuana through dispensaries, manufacturing operations and delivery services.  This suggested that these cities might later adopt state guidelines on these issues and/or adopt the approaches followed by other cities.  Medical marijuana sales were not affected by these new regulations.
Earlier in the year, Inglewood, Rancho Palos Verdes, Hawthorne, Hermosa Beach and Gardena had also passed similar laws banning recreational marijuana sales, cultivation and delivery.
Critics of these bans point out that it is almost impossible to ban deliveries of recreational marijuana within a city and that even in Manhattan Beach, which bans all sales, deliveries and cultivation businesses in its city, there are eleven companies openly operating illegally, according to Weedmaps.com.
Other critics of the ban, Ms. Barnes’ article pointed out, note that a ban only creates “an unfunded enforcement liability” for a city.  Police officers may see the futility or even disadvantage of spending time and effort trying to arrest those who illegally deliver recreational marijuana within a city.
We are not so pessimistic about the benefits of arresting those, as arresting those who do deliver within the city illegally does send a message that such businesses are being monitored and it can lead to prevention of the crimes that are associated with such sales.  We also are well aware that delivery services are often the only way an underage user can access marijuana without having to leave the family home.
Under Prop 64, indeed, revenue from taxes on the sale of recreational marijuana are earmarked for a California Marijuana Tax Fund, from which sixty percent of the expenditures are for youth education programs, twenty percent to environmental damage cleanup, and twenty percent to public safety.
Barnes’ article did describe how at the recent city council meetings convened to address this issue, Torrance “came close,” in a 4-3 vote, to allowing a small number of medical marijuana dispensaries in restricted areas with buffer zones.
In the meantime, until January 1, 2018, Prop 64’s mandate that the state develop strict packaging, labeling and testing continues to await completion.  The state also is laboring to develop a seed-to-sale tracking system through the state’s Bureau of Marijuana Control, formerly known as the Bureau of Medical Marijuana Control.