Home
Other Information
Criminal Defense Articles
What is the Horizontal Gaze Nystagmus Test in a DUI?

What is the Horizontal Gaze Nystagmus Test in a DUI?

When a police officer is trained on how to evaluate a suspect for DUI, the training calls upon studies performed by the National Highway Traffic Safety Administration (NHTSA) or those operating under contract from NHTSA.

Brief Synopsis: The Horizontal Gaze Nystagmus (HGN) Test is a test which multiple studies have identified as being over 90% accurate in identifying a person who has a blood alcohol content (BAC) above the legal limit.  The test is more of an examination of how one’s pupils track an object from left to right and visa versa.  A drunk person’s pupils will “jerk” as the stimulus reaches approximately 45% of centerline.

Over the last 45 years, many studies have been conducted to identify which field sobriety tests (FST’s) actually are reliable indicators of a drunk driver.  The first major study within the United States was by the Southern California Research Institute (SCRI), under NHTSA contract.  It identified the Horizontal Gaze Nystagmus Test (HGN), as well as the Walk and Turn and the One-Leg Stand.
Many other exhaustive studies have confirmed these three tests as meaningful indicators, often as reliable as 90% in identifying drivers who have a blood alcohol content (BAC) above the legal limits.
However, the key is that the test must be administered properly for the suspect’s performance to be significant.  Garbage in, garbage out is the adage that properly fits for this issue.
The California Highway Patrol (CHP) “Driving Under the Influence Manual,” in presenting the procedures for administering this test, warns from the outset: “[b]ecause of the unique nature of this test, it should only be used by officers who have received formal training in its administration.” 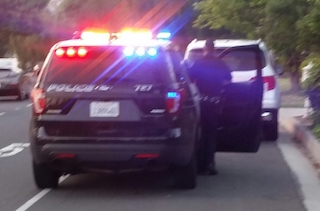 Traffic Stop
This is an important aspect of this test that is commonly overlooked and many officers, we find under cross-examination, are informally trained in this test on the job from other officers, often by on-the-job training (OJT) by just observing other officers administer the test.  Indeed, this test is often shown on television in movies and films being administered in a wholly incorrect manner, yet officers are familiar with this “follow my finger test.”
Consequently, a primary relevant question to ask an officer who administered an HGN test is how he learned to administer the test.
Second, it is good that a DUI defense attorney appreciates that the CHP manual states “the cues associated with HGN are not designed to be considered signs of impairment.”  In other words, a person displaying horizontal gaze nystagmus is not showing signs of impairment, but this is exactly what many officers will testify the results indicate.
Thus, a second relevant question to ask is whether nystagmus, the involuntary jerking of the eyes, is a sign of impairment.
However, officers may state, as the CHP or NHTSA may have taught them, that HGN is the most accurate and reliable FST for determining if one is under the influence of alcohol, which many studies have confirmed.
However, there are limits.  An officer cannot interpret the results of an HGN test and quantify or estimate a suspect’s BAC without scientific expertise.”  In People v. Stephen C. Loomis (1984) 156 Cal.App.3d Supp. 1, 202 Cal. Rptr. 767, a CHP officer stopped Loomis, who was driving a red Ferrari in San Diego County allegedly at 70 miles per hour and lane straddling.  The CHP officer testified that, based on Loomis’ performance on the HGN test (then called the lateral gaze nystagmus) test, that Loomis’ BAC was “between 0.15% and 0.16%.”  The officer, who had been an officer for five and a half years, further testified that he could accurately estimate the BAC of a suspect 96% of the time within 0.02% of the correct BAC.
Loomis moved to suppress such testimony as calling for an expert opinion and the officer did not have sufficient expertise to so testify.  The Appellate Division of the Superior Court of San Diego agreed, excluding such testimony.
Nonetheless, the test remains a favorite of law enforcement.  Yet it must be given properly.  How should it be given?  The subject must exit his car and stand facing the police officer.  It is common for officers to administer the test while the driver remains sitting behind the steering wheel or even sitting on a curb, which is improper.
This is what the CHP instructs as to the proper administration of the test:
Defense counsel can ask the officer to describe how he performed the test and if his description is inconsistent with the CHP / NHTSA guidelines, defense counsel can argue that the findings are meaningless.
For more information about field sobriety tests (FST’s), , please click on the following articles:
Contact us.
Serving Torrance, Long Beach, Compton, Airport Courthouses and Other Courthouses.