Home
Other Information
Criminal Defense Articles
What is an Estes Robbery? Why is it a Strike?

What is an Estes Robbery? Why is it a Strike?

You believed you were just shoplifting, but when loss prevention or the store owner tried to stop you, you fought back.  Now you face a strike for robbery (Penal Code § 211) under California’s Three Strikes law?  Why?  What is the punishment?  What are the defenses?

Summary in 50 Words or Less: An Estes robbery is a theft, often shoplifting, wherein force is used by defendant against someone trying to apprehend or stop the theft.  Quite often, it involves a shoplifter fighting with loss prevention officers.  An Estes robbery is a strike under California’s Three Strikes Law.

Your attorney may have told you that your shoplifting-turned-robbery case is called an “Estes robbery.”  In People v. Estes (1st App. Dist., 1983) 147 Cal. App. 3d 23, 194 Cal. Rptr. 909, Mr. Curtis Dale Estes went into a Sears at Larwin Plaza in Vallejo.  He walked in wearing just jeans and a t-shirt.  He then walked over to an area in Sears where corduroy jackets were sold.  He put one on and it seemed to fit.  He then saw a down-filled vest on another rack and went over to it, took off the coat, put on the vest and then put the corduroy jacket back on over the vest.
He then tried to walk out of the store without paying for the vest or the jacket.  A security guard employed by Sears saw this happening, so he followed Mr. Estes outside the store and asked him about the jacket and the vest.  He then asked him to return to the store with him.  Estes refused and continued walking away.
The security guard then tried to detain him and Estes pulled out of knife, swung it at the guard and threatened to kill him.
The security guard summoned a second security guard to the parking lot and Estes then agreed to return inside the store.  He then denied using a knife and denied trying to steal the vest or jacket.
He was then charged with robbery (Penal Code § 211, “the felonious taking of personal property in the possession of another, from his person or immediate presence, against his will, accomplished by force or fear”), as well as use of a deadly weapon (Penal Code § 12022(b)) and petty theft (Penal Code § 484). 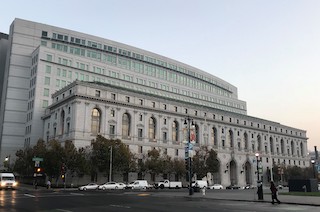 Court of Appeal First Appellate District San Francisco
He was convicted of all three charges and appealed on many grounds.  The appellate court sustained the convictions and explained that it is not necessary that the victim, i.e., the guard or a shop owner, be the owner of the goods.  The victim only needs to have constructive possession of the goods.  In the Estes case, the security guard was an agent of the store owner and had constructive possession of the items.
The court then discussed People v. Anderson (1966) 64 Cal. 2d 633, 51 Cal. Rptr. 238, 414 P.2d 366.  In Anderson, defendant entered a pawn shop and, posing as a customer, asked the salesman to show him a shotgun and shells.  The salesman complied.  No force was used at this point. Defendant took the shotgun, loaded it, and robbed the salesman at gunpoint. (Id, at pp. 635-636.)

What is the punishment for robbery?  The low term is two years, the middle-term is three years and high term is five years in state prison, which is mandatory.  Robbery is a strike offense under California’s Three Strikes law because it is a violent felony listed under Penal Code § 667.5(c).  It is also listed as a serious felony under Penal Code § 1192.7(c).

Probation can be offered in “an unusual case,” usually with a “joint suspended,” meaning defendant is actually sentenced to state prison, but imposition of the sentence is suspended.  The terms of probation can include up to a year in county jail, as well as a theft prevention class, a stay-away order from the store (and shopping mall if the store was in a mall), plus Cal-Trans, community labor or community service.

The defenses to such a charge are that defendant did pay for the items, that defendant did not use force or violence against another while in the commission of the theft, mistaken identity (perhaps with an alibi of where defendant truly was at the time) and, in some cases, a statute of limitations defense if more than three years passes between the time of the robbery and the filing of the complaint against defendant.
For more information about robbery, please click on the following articles:
Contact us.
Serving Torrance, Long Beach, Compton, Airport Courthouses and Other Courthouses.