Our client, age 24 at the time, was detained by campus police from Cal State Long Beach, after an assistant dean notified campus police that our client was attending his lecture after his tuition was overdue.  Our client was attending the college in working toward his teaching credential.
Our client had not created any disturbance in class.  In fact, he was aware that he was behind on his payments of tuition, and had been told his account was delinquent.  According to the school’s policies, a student must continue to attend classes while payments are overdue so that the student does not fall too far behind while the account is overdue.
Our client consequently continued to attend class.  On the day he made his payment bringing his account current, he was told to seek out the signature of one assistant dean to be reinstated.  He therefore went to the class where the assistant dean was lecturing and before he could obtain the signature, he was detained by campus police.
It was a bit heavy-handed by campus police.  They walked into class, with a full classroom of students at the end of the lecture, and asked our client to step outside.  All the students in the classroom saw the uniformed officers step into the classroom.  It seemed like they had just caught a serial rapist after years of having eluded police. 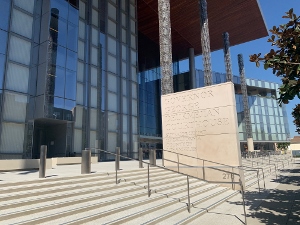 Long Beach Courthouse
The police took our client to their office in handcuffs and told him he was being detained on charges of trespassing because he was on school property after his status as a student was revoked due to his tuition default on payments.
Our client responded that he had just made his payment to bring his account current and that he was instructed by the college to seek the signature of a particular assistant dean to be re-enrolled based on the dean knowing our client had not fallen behind on classes because our client kept current on the classwork and homework.
The campus police were rude and read our client his Miranda rights, which is somewhat comical insofar as they are not government agents at all.  They then asked him if he wanted to make any statement after he just did before his rights were read to him (as if that would matter anyways).
Our client wisely then kept his mouth shut and was released after about three hours, during which time the campus police called the Long Beach Police Department, hoping they would come to take him into custody and book him.  The Long Beach Police Department declined to do so.  Upon releasing our client, they made his sign a ticket with a promise to appear in the Long Beach Superior Court in about two months.  The client signed the promise to appear and was allowed to return home.
After being released, our client looked closer at the ticket, seeing that it stated the basis for the detention was his violation of Penal Code § 626.6(a), a misdemeanor.  The client then called Greg Hill & Associates and discussed the case with Greg.  Greg was amazed at how aggressive the Cal State Long Beach faculty was in enforcing tuition payments.
Greg then appeared on the client’s behalf in the Long Beach Superior Court.  As justice would have it, the handling Long Beach City Prosecutor was himself a Cal State Long Beach graduate and was quite familiar with the college’s heavy-handed ways.  He read through the police report and told Greg, “I know exactly how Cal State Long Beach treats anyone behind on tuition.”  Greg then requested that the prosecutor resolve the case with diversion so the client would not be scarred with a conviction.  The prosecutor responded that he would need to talk to his supervisor about diversion on this.”
Greg then showed the prosecutor documents showing our client was in fact current on his tuition when he was issued the citation and an e-mail from the financial office directing him to obtain the signature of the specific assistant dean who instead of signing the re-admission of our client, called the campus police on our client.
At the next court appearance, the Long Beach Courthouse, the Long Beach City Prosecutor offered a pre-plea diversion offer wherein our client would earn a dismissal without entering a plea of no contest first.  This would mean his teaching credential would not be affected.  Otherwise, were he required to enter a no contest plea, the state licensing board for teachers would consider such a conviction and delay his credential.
The client had to perform 24 hours of approved community service and an “Anti-Recidivism Course” (ARC) at the Long Beach Goodwill headquarters.   Upon doing so and staying away from Long Beach State for six months, the case would be dismissed.
The client grumbled about having to take the class and perform the community service, but he was pleased that Greg had negotiated a dismissal for him.
For more information about trespassing and diversion, please click on the following articles:
Contact us.