Our client, age 24, was a model and an aspiring real estate salesperson.  She had already submitted her application to the California Bureau of Real Estate when she received a call to model clothing at the Sunken City along the cliffs in San Pedro.
Our client did not know what the Sunken City was, so she looked it up online and learned what it was.  She was eager and curious to visit the area, so she accepted the job offer.
She was soon down at Sunken City, posing on various slabs of concrete with colorful graffiti in the background.  She and the photographer completed their photo shoot and were leaving.
As they were climbing up from the area onto the street, they saw about a dozen Los Angeles Police Department officers on foot in the area.  They were collecting drivers’ licenses from a group of people seated on the curb.
Our client and her photographer did not know what was happening, so they walked right up to the officers to ask what had happened.  The officers asked our client and her photographer if they had just visited the Sunken City area and the two answered that they had.  They then instructed our client and her photographer to also sit on the curb with the others. 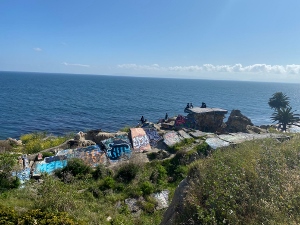 Sunken City
The officers eventually advised those sitting that they were being cited for trespassing.  Our client told the officers that there were no signs giving notice to anyone that this was illegal, but officers ignored our client.
Soon, the officers returned to our client and asked her to sign a promise to appear in court at the Long Beach Superior Court in about six weeks.  This confused the client because she assumed punishment would just be a small fine of perhaps $30, not a court appearance.
When the client returned home to the Hollywood area, she looked closer at the ticket and saw she had been cited for a misdemeanor violation of Penal Code § 602, trespassing.  She researched the offense online and read that she faced up to six months in county jail and up to a $1,000 fine.  She was shocked.  She had no prior criminal history.
Making matters worse, she worked in the real estate field at a commercial real estate company and planned to become a licensed real estate salesperson.
She and her aunt then called Greg Hill & Associates to ask what could be done for her.  Greg listened to the client explain what had happened.  Greg then explained how the City of San Pedro had been periodically ticketing dozens of people in one day recently to try to keep people out of the area.  The area was well known as dangerous and in fact about once every two to three months, someone does fall from the cliffs nearby or find themselves stuck on a steep section of the cliff, requiring a Coast Guard Search and Rescue helicopter to rescue the person.
Greg further explained that if the client were to give him her resume and take some type of online class from the Bureau of Real Estate about trespassing, Greg would write the Los Angeles City Attorney’s Office before the arraignment to try to prevent a filing of the case.
The client then forwarded Greg her resume, but could not find any online class concerning trespassing.  Greg nonetheless forwarded the Los Angeles City Attorney’s Office in Long Beach the client’s resume and explained that due to the client’s future career in real estate, an office hearing would be the most fitting, yet effective way to handle the case.
The Los Angeles City Attorney’s Office apparently ignored the letter and did file the case as a misdemeanor against our client.  Apparently, the Los Angeles Police Department handed out 130 misdemeanor citations that same day as our client received hers.
Greg then appeared in court five times, each time attempting to persuade the Los Angeles City Attorney handling the case (three different ones handled it) to offer some form of diversion to allow our client to earn a dismissal or just an infraction, so our client would avoid being on probation.
Finally, after four months of going to court, Greg persuaded the prosecutor to offer an infraction for disturbing the peace (Penal Code § 415(2), playing loud music).  There was a $100 fine as well.
The client was happy with this, as it avoided the stigma of trespassing on her criminal history and was not a misdemeanor.  There also was no probation on an infraction.
For more information about trespassing and professional licensing issues, please click on the following articles:
Contact us.
Serving Torrance, Long Beach, Compton, Airport Courthouses and Other Courthouses.