Main Point:  Client, age 32, arrested in Torrance for public intoxication while trying to load alcohol into his car; due to extensive prior criminal history, negotiated to no jail, informal probation.

Now, however, he resolved to control himself.  Accordingly, he decided to remove the whiskey that he knew he would otherwise drink.  He decided to put the bottles in his car and give the car keys to a friend, who would then return the keys to him later the next day.  It was responsible.

Police patiently waited for our client to close the door, but after about twenty seconds, concluded something was wrong with our client.  They therefore stopped their car and approached him.

Officers immediately recognized our client.  They observed that he was quite drunk.  Our client protested his intoxication level and, defensively explained his intentions.  When officers inspected his car’s backseat with a flashlight, they immediately found the dropped car keys.  They also inspected our client’s driver’s license and saw that he lived several miles away, although this was not true.  Our client had moved, but had not updated his address.  Officers suspected he was actually about to drive home and thus commit DUI for a third time.

The client decided initially against hiring an attorney.  At the arraignment, the Torrance District Attorney handling the case noted his prior criminal history and made an initial plea bargain that involved 60 days of county jail, ten days of Cal-Trans, a fine of $400, plus penalties and assessments (about $2,200), 100 hours of Alcoholics Anonymous (AA) meetings, payment of a $423 booking fee and 24 months of summary probation.  This rather incredible offer pushed him to calling Greg Hill & Associates.  The client was worried about the jail time in particular because he did not want to lose his new job.

Greg met with the client and listened to the story.  The client and Greg looked at a Google Earth map of the area to better understand the road where our client was allegedly blocking traffic with his open car door after dropping his keys.  It appeared to be a wider road than could be blocked by a car door being opened into traffic.  Therefore, the interference with a thoroughfare requirement was certainly an issue of debate in whether the charge had merit.

Greg then appeared in court and brought the overhead picture for the District Attorney to look at.  The DA agreed that there seemed to be quite a bit of space for the police to pass by, but he wanted to discuss it with his supervisor before adjusting the offer in response to the photograph. 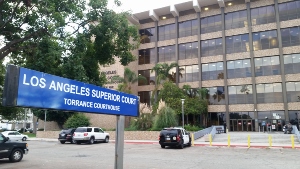 Torrance Superior Courthouse
At the next court appearance, the DA agreed to remove the 60 days of county jail requirement and the ten days of Cal-Trans, which was good.  He also agreed to drop the fine to $200, plus penalties and assessments, which saved the client about $1,100.  However, he wanted the client to do 120 AA’s, or 20 more.

Greg asked the DA to amend the complaint to instead allege a disturbing the peace allegation (Penal Code § 415), but the DA declined.

The client, however, agreed to accept the deal, resolved to keep his job and just get through the 120 AA meetings and pay the $200, plus penalties and assessments.  He wanted closure and was tremendously relieved to avoid the jail.