The Narrowing of the Kill Zone Theory – Shoot to Scare

Why This Article Matters: The Canizales opinion limits the use of the  “Kill Zone Theory” to specific facts and is an important case to understand if one is a defense attorney representing someone in a gang case.  The following article summarizes this new case applying much overdue limits on the overused “Kill Zone Theory” of murder and attempted murder.

Prosecutors have applied this theory to shootings into any crowd, i.e., at a party, or social function like a funeral or rally.  They have even applied it to drive-by shootings into a house or gathering near a crime scene from an earlier crime when someone shoots from a passing car.
Defense counsel have complained that this application is misguided because defendant often has no specific individual targeted and instead is committing assault with a deadly weapon, not attempted murder or murder.  In other words, the kill-zone theory is being overused, especially in gang cases.  The prosecutor has a hammer and any crime involving a shooting with more than one target becomes a “kill zone” nail on which to use his new hammer.
On June 24, 2019, the California Supreme Court seemed to put an end to such overuse of this prosecution theory.  The state’s highest court held in People v. Canizales (2019) 7 Cal.5th 591 that “a jury may convict a defendant under the kill zone theory only when the jury finds that:
Canizales, supra, 7 Cal.5th at pp. 596-597.
It is against this new framework that the 2004 verdicts of Juan Marshall Rayford and Dupree Antoine Glass were reconsidered by the Second Appellate District in Los Angeles in a petition for writ of habeas corpus filed by Mr. Rayford (2020 DJDAR 5872). 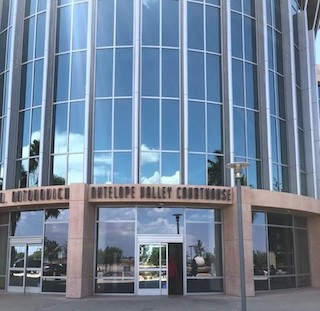 Lancaster Courthouse
The underlying facts were that Rayford and Glass each were convicted in Lancaster Superior Court of 11 counts of attempted willful, deliberate and premeditated murder and one count of shooting at an inhabited dwelling (Penal Code § 246).  As to all counts, it was alleged that Rayford and Glass committed the offenses for the benefit of, at the direction of, or in association with a criminal street gang (Penal Code § 186.22(b)) and that each personally discharged a firearm (Penal Code § 12022.53(c) and (e)(1)).
The jury found both defendants guilty of all counts and the judge, Robert J. Perry, sentenced each defendant to eleven consecutive life sentences plus 220 years on the firearm enhancements (20 years on each count under 12022.53(c) and (e)).  The judge stayed the sentence on the gang enhancements and on count 12, shooting at an inhabited dwelling.
Glass and Rayford had gone to a house in Lancaster to fight with another man, Perry.  They were told by a woman that Perry was not at the house.  When they got there, they realized they had been tricked into coming to the house and so they went outside and fired a barrage of bullets into the home, through a front living room window.  No one was standing in front of the window.  Two people were shot, but no one died.   There were eleven people in the house, so there were eleven counts of attempted murder.
The prosecution proceeded on a “kill-zone” theory, but with jury instructions that the jury could find defendants guilty if they found “the manner in which the bullets were shot indicated an intent to harm everyone in the vicinity.”
After the convictions, the gang enhancements were vacated on appeal.
Glass and Rayford then appealed on a change in the law, due to Canizales’ refinement of the kill-zone theory, and the Second Appellate District agreed, vacating the convictions.  The Second Appellate District found the convictions were flawed because neither defendant had a specific target or a primary victim intended.  Here, both defendant acted with conscious disregard of the risk of serious injury or death for those, but without specific intent to kill the group.
Moreover, the court found each shooter shot a maximum of four bullets.  Glass shot at the house to scare the occupants.  There was one woman inside the house, but visible from outside the house and Glass did not aim at her.  He shot at the structure of the house, at the glass windows to frighten the occupants and show he and Rayford were angry at being tricked into coming to fight Perry, who was not there.
We bring this summary to the reader’s attention because the “kill-zone” theory was, we suspect, applied to cases like this, but in error and other petitions for writs of habeas corpus may be viable on Canizales grounds as well.
The citation for the Second Appellate District Court ruling discussed above is In re Juan Marshall Rayford (2d App. Dist., 2020) 50 Cal. App. 5th 754, 264 Cal. Rptr. 3d 401.
For more information about the kill zone theory and murder in general, please click on the following articles:
Contact us.
Serving Torrance, Long Beach, Compton, Airport Courthouses and Other Courthouses.