Convictions Reversed When Based on 'Kill Zone' Theory

On January 19, 2008, at least 428 people attended an eighteenth birthday party at a Masonic Lodge in Lakewood, California. The party was for twin brothers Randall and Carlton Hook, African-Americans who formed an anti-gang group to challenge the stereotype that African-American adolescents from Compton were trouble makers.

For unknown reasons, but sadly ironic, shots suddenly were shot from within the party and two partygoers were killed. Another partygoer was shot in the leg. Criminalists examining the scene after the party determined ten shots were fired in total.

Witnesses quickly identified Izac McCloud and Jonzel Stringer as firing the weapon into the crowd. They were soon arrested and charged with violating Penal Code §§ 187 (murder) and 664 (attempted murder) of the one individual shot, but not killed, and the attempted murder of 59 other name victims. 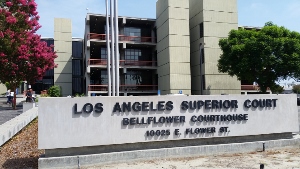 Bellflower Courthouse
The charges against both defendants were tried together, but to different juries. Both were convicted. The judge sentenced McCloud to 202 years to life in state prison. The 202 years included forty-five sixteen month sentences to run consecutively (not concurrent) for the personal use of a firearm on each of the attempted murder counts not dismissed. Fourteen of the attempted murder counts were dismissed by the prosecution.

The judge sentenced Stringer to 198 years to life in state prison. Included within the sentenced were forty-five consecutive terms of twelve months as a principal armed in the attempted murders.

Both defendants appealed on multiple grounds. This article will focus on the defendants’ argument that the trial court committed error by instructing the jury on the “kill zone” theory of liability for attempted murder.

The Second Appellate District, in People v. Jonzel Stringer (2012 DJDAR 16323), quickly recognized that the “kill zone” theory was based on principles of transferred intent. The court pointed out the distinction between the intent in murder and that in attempted murder.

In contrast, in attempted murder, the prosecution must prove that defendant had the specific intent to kill and that defendant made “a direct, but ineffectual act toward accomplishing the intended killing.” People v. Lee (2003) 31 Cal. 4th 613, 623.

Under the doctrine of transferred intent, a defendant who shoots with the intent to kill a certain person and kills a bystander instead is subject to the same criminal liability had “the fatal blow reached the person for whom intended.” People v. Suesser (1904) 142 Cal, 354, 366.

Transferred attempt, however, cannot support attempted murder convictions concerning non targeted individuals who were not killed. Someone who intends to kill only one person and attempts unsuccessfully to do so, is guilty of the attempted murder of the intended victim, but not of others. People v. Bland (2002) 28 Cal. 4th 313, 328.

The “kill zone” theory, here the appellate court decided, could not apply to 45 individuals when only ten bullets were fired. It also does not act as a means to bypass the specific intent mental state required for attempted murder. Here, there was only one target- a person who punched Stringer.

Thirty-eight of the forty-five convictions for assault with a firearm, with the intent to murder, were thus reversed and the sentences for each defendant were vacated.

The citation for the Court of Appeals ruling discussed above is People v. Izac McCloud and Jonzel Stringer (2012) 211 Cal.App.4th 788.

For more information about attempted murder and other violent crimes, click on the following articles: