The Megan's Law Website Should Be Used by Police Only

Make no mistake about it.  Crimes of sexual violence devastate victims, tear families apart and can even terrorize communities.  Those who commit such crimes must be punished so that the risk of recidivism is reduced and others are deterred from committing the same crime.  We all understand this.

This article in not meant to apologize for convicted sex offenders.

The Reader’s Digest Version:  We think the Megan’s List online listing of registered sex offenders should not be available for public viewing.  The purpose of the listing is to regulate such offenders and police should be in charge of this, not the public because public “regulation” often changes to ostracizing, gossip, untrue rumors and punishment to the offender’s family.

Instead, it will explain why the Internet posting of those required to register as a convicted sex offender at Megan’s Law.ca.gov, the official State of California public sex offender registry, and the Sexual Offenders The Nation Wide Network website need to change from a publicly accessible database to police-only database. 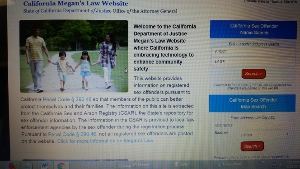 Megan's Law Website Screenshot
Our office has represented many clients accused of various sex crimes.  Some were accused of sex offenses by a jealous girlfriend (or in one case, a boyfriend), a vengeful step daughter, a spiteful co-worker or even a materialistic spouse who was angry that her husband refused to buy her a white Mercedes.  Very often, we really do not know if our client committed the offense.  We do not know the truth.
We are acutely aware, however, of the collateral consequences of a conviction for a sex crime that requires registration under Penal Code § 290.  Most clients respond by moving to a different community to start their life anew, away from those they developed ties with.  Others, the minority, remain in the community, often because they do not want to disturb their children’s stability with schools, friends and sports.

This is a risky decision.  When one remains in the community that they were in before the crime, it is inevitable that their conviction status will be revealed and old scars will re-open.  This is because realtors, as part of their “due diligence” in effecting a residential transfer of property ownership, will provide the buyer with the client’s information available on the Internet, as it may affect a home-buying decision.  The buyer will be either concerned or curious about the sex offender in their neighborhood.  They often will gossip with other neighbors about this after they buy the home.  The gossip can spread quickly and hysteria can erupt about the “public safety danger” our client poses.

Likewise, if the convicted sex offender has children who wish to join the Boy Scouts or Girl Scouts, or if the parents want to coach their children in AYSO soccer, Little League baseball or YMCA basketball, the organization behind the activity will also check the website to ensure the parent is “clear,” meaning not on the website.  This causes such parents to never volunteer for fear that their past conviction will be revealed.

The statistics on sex offenses suggest the online databases really have little benefit.  A 1997 Department of Justice study showed that only 18.6% of released sex offenses were re-arrested for a violent offense again.  This study was conducted after the Internet postings described above had just started (they began in 1994) and well before the Internet was accessed as widely as it is today.  There is no statistic to show if such an offense, in the 1997 study, was even a sex offense.  Indeed, it could have been domestic violence or fighting in public (“disturbing the peace”).

Moreover, sharing the identities of convicted sex offender’s allows the public to ostracize such people, often leading them to move away.  Moreover, having the public focus on registered offenders allows or even facilities the continued activities of undetected sex criminals.  Instead of policing the offenders, the public is less aware of ongoing crimes because their attention is distracted toward those who most likely will not re-offend.  After all, they wear a modern-day “Scarlet Letter.”

In short, the online data bases have enormous adverse collateral consequences, most of which are unjustified and disproportionate to the actual risk such people pose or the perceived benefit to the pubic.  The public become policemen, but without the necessary training to properly use such information; yet with self-righteous hysteria and a misguided sense of purpose.

In our opinion, a parent with a record of DUI, domestic violence on a child, narcotics sales, murder, manslaughter or repeated reckless driving is equally, if not more dangerous to our children and others.  There is no publicly available website identifying such people.  There are several reasons why this is not available, but one reason surely is because such information can be misleading, just as is information about a convicted sex offender.