The Gist of this Article: The SVP Act allows the judge to consider hearsay, when offered by an expert, at a probable cause hearing, but not at an SVP trial.

In order to commit a person as an SVP, the District Attorney’s office who originally prosecuted that person must show that the person has been convicted of one or more of the sexually violent offenses listed at § 6600(b); the person has a diagnosed mental disorder; and the mental disorder “makes the person a danger to the health and safety of others in that it is likely that he or she will engage in sexually violent criminal behavior.”  § 6600(a)(1).
“The civil commitment can only commence if, after a trial, either a judge or a unanimous jury finds beyond a reasonable doubt that the person is an SVP.”  Cooley, supra, 29 Cal.4th at 243.
“The trial, however, is the last stage of a complex administrative and judicial process to determine whether an offender should be civilly committed as an SVP.”  Cooley, supra, 29 Cal.4th at 244.
Before the People can even file a petition to commit an inmate as an SVP, the Department of Corrections and Rehabilitation (CDCR) must first screen the inmate, generally at least six months before his or her scheduled release date.  § 6601(a).  “If as a result of this screening it is determined that the person is likely to be a sexually violent predator, the [CDCR] shall refer the person to the State Department of State Hospitals for a full evaluation of whether the person meets the criteria in Section 6600.”  § 6601(b).
The assessment requires examination of diagnosable mental disorders, as well as various factors known to be associated with the risk of re-offense among sex offenders.  The offender is first evaluated by two mental health professionals designated by the Director of State Hospitals.  § 6601(c).  If both evaluators concur “that the person has a diagnosed mental disorder so that he or she is a likely to engage in acts of sexual violence without appropriate treatment and custody,” the Director of State Hospitals forwards a request for a civil commitment to the county in which the inmate was convicted for the offense for which he or she is currently incarcerated.  Both evaluators must agree that the individual poses a risk. 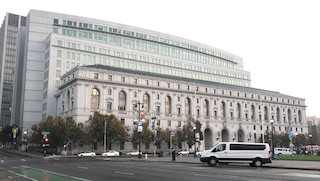 Court of Appeal First Appellate District San Francisco
The county prosecutor then files a commitment petition, which is filed in the superior court.
Once the petition is filed, a judge must review it.  It the judge determines that there are sufficient facts to establish probable cause that the individual is likely to engage in sexually violent predatory criminal behavior upon his or her release, then the judge orders a probable cause hearing.
At the probable cause hearing, the SVP is entitled to assistance of counsel.  If the judge determines that there is probable cause, the judge shall order that the person remain in a secure facility until trial is completed.
When a case advances to trial, the People have the burden of proving beyond a reasonable doubt that the person considered is a sexually violent predator.  If the judge or the jury determines that the person is a sexually violent predator, the person shall be committed for an indeterminate term to the custody of the State Department of State Hospitals for appropriate treatment and confinement in a secure facility.”
Once the person is committed as an SVP, the Department of State Hospitals must conduct annual mental health examinations, reporting to the court whether the person continues to meet the definition of an SVP. § 6604.9(a).  The report must recommend whether unconditional discharge or conditional release to a less restrictive alternative (that would adequately protect the community) is in the person’s best interest.
If the Director of State Hospitals does not recommend either unconditional discharge or conditional release, the SVP may still petition for conditional release under § 6608(a).
The probable cause hearing described above is a critical stage of the proceeding.  At it, there is an exception to hearsay rule to permit (or even requires) a judge to consider expert evaluations on which the petition necessarily depends, including case-specific facts obtained from hearsay sources such as the police report and psychological reports containing summaries of interviews and tests of the individual.  § 6602(a).
This exception to the normal hearsay rules was challenged as a Sixth Amendment violation recently by Jeffrey Walker, citing to Bennett v. Superior Court (2019) 39 Cal.App.5th 862 and People v. Sanchez (2016) 63 Cal.4th 665, who had to undergo such a probable cause hearing in 2016 when nearing the end of his sentence for a 1990 conviction for rape in San Francisco County.
The trial court denied his motion to exclude such reports, and Walker filed a writ to the First Appellate District Court.
The First Appellate District Court denied Walker’s writ as well, clarifying that the court may consider such hearsay in reports for the probable cause hearing, but not at an SVP trial (Jeffrey Walker v. Superior Court of the City and County of San Francisco (2020 DJDAR 6850)).
The citation for the First Appellate District Court ruling discussed above is Jeffrey Walker v. Superior Court of the City and County of San Francisco (1st App. Dist., 2020) 51 Cal. App. 5th 682, 265 Cal. Rptr. 3d 423.
For more information about sexually violent predator (SVP) issues, please click on the following articles:
Contact us.
Serving Torrance, Long Beach, Compton, Airport Courthouses and Other Courthouses.