Our client, age 35 in 1999, applied for Section 8 housing assistance in Santa Monica with his mom and dad.  At the time, our client was a licensed attorney, but working as a legal assistant to an attorney, as the job market was extremely tough.  It was hard to find a job to pay off student loans.  His parents were retired.
The application filled out by our client and his parents failed to disclose significant assets that his parents had that otherwise would have disqualified their application.  However, the Housing Authority for the City of Santa Monica reviewed the application on its face and did not perform any type of alternative, independent asset search on the parents or our client.
The application was approved and from August, 1998 to February, 2001, the landlord for the apartment complex where our clients applied received a monthly payment to help our client and his parents pay the rent.
The Santa Monica Housing Authority performed periodic inspections of the rental units receiving rental assistance and when they went to visit our client’s stated residence, he was not living there at all.  Nor were his parents.  There was another family living there, but they were subletting the apartment from our client and his parents, paying them rent. 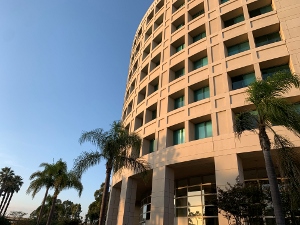 LAX Courthouse
The Santa Monica Housing Authority then reported to the Santa Monica Police Department that our clients had committed grand theft and fraud by receiving such housing assistance only to, in turn, rent out the apartment for far more money.
The Santa Monica Police Department prepared its police report and recommended prosecution of our client and his parents.  After applying for such rental assistance, our client had opened his own law office and married a woman from Brazil.
When our client learned that his parents were being investigated for grand theft, our client fled to Brazil with his wife and took all the money in his client trust account, which was money from 46 clients.
Meanwhile, his parents were prosecuted and convicted of felony grand theft and convicted.  They were each placed on formal probation and ordered to pay restitution.  The mom paid $3 toward $13,994 owed.  The father paid nothing.  When police could not locate our client, a felony bench warrant was issued.
Our client then lived in Brazil for many years before moving back to his homeland, Israel, where he lived until 2019.  In 2019, he applied to return to the United States to visit his now very elderly mom in poor health.  However, he could not return to the United State with a pending bench warrant and his passport had been seized by the Santa Monica Police when they searched his parents’ true residence in 1999.
The client contacted Greg Hill & Associates and asked what he could do.  Greg listened to the client explain what had happened and how he wanted to return to the United States, but could not without the passport and the risk of being taken into custody due to the bench warrant once he landed in the United States.
Greg explained that because the case against him was a felony, a judge would require the client to appear in person to have the bench warrant recalled, with one narrow exception.  That exception was if the client signed a proper Penal Code § 977(b) Waiver of Personal Appearance.  By the Penal Code, such a waiver must be entered into in court, so it really did not apply to our client because he had not been to court yet.  However, Greg explained, he had several judges accept a signed 977(b) waiver that was signed by the client, notarized and with a color copy of the client’s driver’s license or other identification.  Greg cautioned that no judge is required to accept such a waiver not entered into in court, but Greg could present such a waiver and hope for the judge to allow such an appearance by him on the client’s behalf to have the warrant recalled.
Greg then prepared such a waiver and e-mailed it to the client, who was no longer in Brazil (his exact location will remain confidential).  The client signed it, had it notarized and attached a copy of his Naturalization Certificate.
Greg then went to court and attempted to appear for the client to have the bench warrant recalled. The judge did not allow such a waiver, but he did look at the case closely and appreciated the intent of the client to resolve the case.  The judge then asked the prosecutor if she would dismiss the case if our client paid the $13,994 allegedly stolen by our client and his two parents.  If the case was dismissed, then the judge would recall the warrant.
Our client agreed and Greg thereafter paid the $13,994 to the Santa Monica Housing Authority after our client wired it to the firm trust account.  Greg then paid the full amount by a cashier’s check and took the signed receipt of this payment to the court.
The District Attorney, good to her word, then agreed to dismiss the case and the judge recalled the bench warrant.  Greg then retrieved the client’s passport from the Santa Monica Police and Fed-Ex’d it to our client and he happily returned to the United States.
It merits mention that this result was essentially a civil compromise of a felony case, which is normally not allowed under Penal Code §§ 1377 and 1378, which limit a civil compromise to a misdemeanor case.  The client was very happy with this result, as he avoided a conviction.
For more information about the issues mentioned in this case, please click on the following articles:
Contact us.
Serving Torrance, Long Beach, Compton, Airport Courthouses and Other Courthouses.