Our client, age 56, was riding his bike back home from work at about 11:30 p.m.  He worked in a print shop and the store closed at 11:00 p.m.
As he rode along Wilshire, he realized he needed to urinate.  So he spotted an alley that looked dark enough that no one would be able to see him from Wilshire and turned his bike into the alley.  He rode about fifty feet to an area with dark shadows that looked like it would conceal his urinating from anyone who might look down the alley.
Our client had no prior history and he had not consumed any alcohol earlier in the evening, unlike most people who are cited for public urination.  Our client then parked his bike and got off.  He had just begun to urinate when a police car turned into the alley and its lights illuminated our client urinating.
Our client was literally caught in the act, much to his misfortune.  The police officer drove up to our client and apologized for disturbing him, but explained he was going to cite his for public urination, a violation of Santa Monica Municipal Code § 5.08.110(d), a misdemeanor.  The police officer then handed our client the ticket, asking him to sign it and left.
The client was not told that he had just signed a promise to appear in the Airport Courthouse about six weeks later.
Our client folded the ticket in his pocket and rode home.  He then went to bed, not realizing that the offense was a misdemeanor.  Our client assumed he would have to pay a $25 fine or something thereabout and no more. 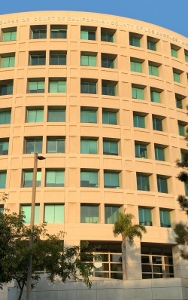 The client looked at the ticket more closely the next morning and was shocked to see that the offense was a misdemeanor.  He further read that he had to appear in the Los Angeles Superior Court on La Cienega in about six weeks.  He then researched the offense, Santa Monica Municipal Code § 5.08.110(d), and found out he could face six months in jail or a $1,000 fine.
He then called Greg Hill & Associates and explained what had happened.  Greg explained that such cases often are resolved for an infraction or even offered diversion, depending upon the circumstances, the client’s age and the client’s prior criminal history.
Greg then recommended that the client attend at least ten meetings of Alcoholics Anonymous (AA) even though the case did not involve alcohol at all.  The client understood that it was assumed that he had drank too much and was coming back from a bar because of the time of the citation.
The client, however, only attended six AA meetings.  He gave Greg the AA sign-in sheet to take to court, as well as his resume.
Greg then appeared for the arraignment and discussed the case with the Los Angeles City Attorney assigned to the case.  He showed the prosecutor the AA sign-in sheet and the client’s resume.  The prosecutor then agreed to amend the complaint to allege an infraction for a violation of Penal Code § 415(2) (“Disturbing the Peace”), but only if the client first performed 16 hours of approved community service.
Greg then advised the client of this offer and the client accepted.  He then performed sixteen hours of approved community service and Greg returned to court with the proof of the community service being completed.
True to her word, the prosecutor then dismissed the misdemeanor and allowed our client to plea to the infraction.  This was far less damaging to our client’s record, as there is no probation with a conviction for an infraction and the client would be eligible to have it expunged in one year.
For more information about public urination, please click on the following articles:
Contact us.
Serving Torrance, Long Beach, Compton, Airport Courthouses and Other Courthouses.