Our client was a 23-year old woman from Nigeria here on a work visa.  She was arrested by the Redondo Beach Police Department after being caught shoplifting $876.44 in items (mostly clothes, but jewelry and shoes, too) from Macy’s at the South Bay Galleria.  When the police caught her, she had a fake I.D. in her possession, too.  She was uncooperative with police. 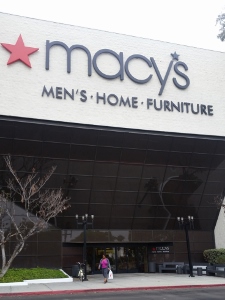 Our client was outraged that she was stopped and searched with the stolen items in a large bag.  She asked if it was racial profiling, as she was African.  She wanted to know if she could sue Macy’s and the Redondo Beach Police Department for violation of her constitutional rights.

The Gist of This Article:  Client, age 23 and from Nigeria, shoplifts $876.44 in items at the Macy’s in the South Bay Galleria.  Case resolved for judicial diversion, so no conviction.

She called up Greg Hill & Associates, aware that her immigration status could be affected by a conviction for a crime of moral turpitude.  She was eager to know if Greg could have the case dismissed because it was her first crime in the United States since she had come her less than a year earlier.

Greg listened to the client describe what had taken place and explained that with her immigration status, prosecutors are obligated to consider this in resolving the case, although this duty is not to dismiss or offer leniency.  Greg explained that in some cases of first-time shoplifting, he is able to persuade the prosecutor to amend the complaint to allege a crime that is not a crime of moral turpitude (CIMT) that has adverse immigration consequences.  However, Greg cautioned, this decision to amend the complaint is usually limited to cases involving very low value items, or maybe even one item, and clients who are cooperative with police.

Greg, however, promised to attempt this route in plea bargaining, but if it were unsuccessful, the next best option would be to seek judicial diversion under Assembly Bill 2124 (AB2124), wherein the client would be offered a dismissal if she performed certain obligations ordered by the judge.  The problem with such a resolution is that the client must still enter a “no contest” plea to a charge, here of Penal Code § 459.5 (shoplifting), although this is later withdrawn and the case dismissed thereafter if the client completes the terms of diversion.

In our client’s case, the Redondo Beach City Prosecutor would not agree to amend the complaint to allege trespassing or disturbing the peace, stating that the amount of the theft, the possession of a fake I.D. and the client’s uncooperative attitude with police disqualified her from resolving the case under a non-CIMT charge.

Greg therefore opted to have the judge place her in judicial diversion, which the Torrance judge did, ordering her to perform 80 hours of community service and to complete an online shoplifting prevention course – and staying away from all Macy’s for six months.  At the end of six months, our client would be eligible to have her plea withdrawn and the case dismissed.

The client agreed to such a resolution and did thereafter complete the 80 hours of community service and the online shoplifting prevention program, as ordered.

Greg then returned to court in six months, showed the Redondo Beach City Prosecutor and the judge the documentation showing she fulfilled the terms of judicial diversion.  The complaint was then dismissed under Penal Code § 1001.96 (the codification of AB2124), which helped our client minimize the adverse consequences of her arrest for a crime of moral turpitude.

She was happy that in the future, she could legally answer “no” to any employment questionnaire asking, “have you ever been arrested or convicted of a crime” insofar as this incident at Macy’s.

For more information about shoplifting and diversion issues, please click on the following articles:
Contact us.
Serving Torrance, Long Beach, Compton, Airport Courthouses and Other Courthouses.