Redondo Beach, Selling Alcohol to a Person under 21, Dismiss

Our client, age 55, was working in her husband’s liquor store on Inglewood Avenue.  The couple had purchased the store three months earlier and were just getting used to the business. 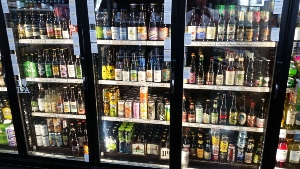 Our client was not a regular employee and on the day at issue, was only standing in for her husband at the register for a few minutes while he ran an errand.  Our client instead “worked” as a volunteer at her granddaughter’s elementary school, often up to four hours per day and loved being around the children each day.

In a Nutshell: Client, the wife of a liquor store owner on Inglewood Avenue in Redondo Beach, mistakenly sells an underage police decoy a six-pack of Bud Light.  Case dismissed after client completes judicial diversion involving the LEAD class and 20 hours of community service.

Our client, while being born outside the United States and having a name reflecting her heritage, was a U.S. citizen.  She was not Caucasian.

As luck would have it, during the ten minutes while our client was manning the cash register, a very young looking undercover police officer (age 19) from the Redondo Beach Police Department entered the store.  A fellow officer also entered to observe.

The young-looking officer got a six-pack of twelve-ounce Bud Lights and proceeded to the case register, where he put the six-pack on the counter.  Our client scanned the beer and told the cop the price of the beer.  The undercover cop pulled out his wallet and handed our client a $20 bill.  Our client took the money, put it in the cash register and handed the cop the change.

At no time did our client ask the cop his age or request identification.

The officer then walked out of the store, only to return inside, escorted by two uniformed police officers.  The officers informed our client that she had just sold alcohol to an underage person age 19.  Our client commented that she thought he looked to be twenty-one.

The officers then handed our client for a violation of Business and Professions Code § 25658(a), “furnishing alcohol to a minor.”  The client did not understand that a conviction for this offense was a misdemeanor and that it carried with it a fine of $1,000, plus penalties and assessments that would total $4,500 or thereabouts, plus an obligation to perform 24 hours of community service at an approved alcohol or drug treatment facility.  In addition, the California Department of Alcohol Beverage Control could suspend the store’s license for fifteen days with such a conviction.

She and her husband assumed it was a ticket and that she only need to pay perhaps $100 “to make it go away” even though our client signed a promise to appear in court on a future date.  They therefore called Greg Hill & Associates to “find out who they needed to pay to make it go away.”

Greg Hill answered the call and advised the client that such a citation was not just a $100 ticket at all and that, moreover, a conviction for such a misdemeanor might jeopardize the volunteer activities of the client at the school.  Greg further described the other consequences of such a conviction.  The client was taken aback.

Greg explained, however, that since the client had no prior criminal history, she would be eligible for judicial diversion.  Greg suggested that the client enroll in and complete a LEAD (Licensee Education on Alcohol and Drugs) class before the upcoming arraignment so that Greg would be able to more persuasively request judicial diversion, as it is discretionary (the judge can say no).

Greg then went to the Torrance Courthouse for the arraignment.  The Redondo Beach City Prosecutor’s offer was a conviction for violating § 25658(a), three years of summary probation, a $1,000 fine plus penalties and assessments and 24 hours of community service at an approved alcohol treatment center.

Greg asked the Redondo Beach City Prosecutor if she had any flexibility on this offer, suggesting that his client would like to earn a dismissal by attending 30 Alcoholics Anonymous meetings, performing 40 hours of community service and completing the LEAD program, which she already had done.  Greg showed the prosecutor the certificate of completion from the program.

The prosecutor said she would not negotiate on the deal.

Our client was extremely happy with this outcome and thankful that Greg had recommended the client take the LEAD class before the arraignment.

For more information about providing alcohol to an underage person, please click on the following articles:
Contact us.