Our client, age 29, had been out to dinner and two bars in the Hermosa Beach Pier Plaza area with his girlfriend.  He had an excellent job of many years at LAX, so he felt a sense of stability and security.  The two planned on using Uber to get home, so they drank more than what they otherwise might.

Closing time was approaching for the bars for the evening, so the couple decided to leave a bit earlier to get an Uber more easily than facing jostling with dozens of others also seeking an Uber at 2:00 a.m.

It was 1:20 a.m. and the two walked out into the warm late-Spring night.  Once the two got outside, our client realized that he needed to urinate.

They had already called Uber, so they were walking over to the edge of Pier Plaza where the driver told them to meet him.  Our client tried to enter a few bars near the beginning of Pier Plaza, but each told him that he could not enter at that time.

The two then saw Robert’s liquor and the client decided to ask to use the store’s restroom.  The client’s girlfriend stayed outside and our client walked in.  He asked the owner if he could please use the store’s bathroom.  The owner said no. 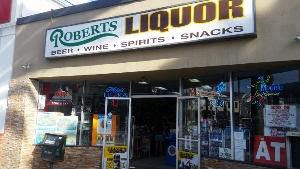 Robert's Liquor Store
Our client was not only drunk, but frustrated.  The combination of these two mental states led him to wander toward the back of the store, thinking he could still find a door to a restroom.

He then spotted a bucket on the ground and decided to use it to urinate into.  The store owner was closely watching our client, as he suspected our client might do something ill-advised.  Once he saw our client looking for a door, he called the police for assistance.

Within seconds, the police responded, as there are regularly many police in the Pier Plaza area.

The police officer walked in just as our client was urinating into the bucket, holding the bucket with one hand.  The police and the store owner saw our client urinating and immediately told him to stop.  Our client pretended to ignore the yelling and continued to urinate.

Once he finished, the police officer told him he was under arrest.  In response, our client denied urinating at all, although he was still holding the bucket, filled partially with his own urine.

Our client then refused to put his hands behind his back, but once the officer laid hands on our client, our client quickly submitted and was taken to the Hermosa Beach Police Station for booking and a few hours to sober up.

Once released, he called Greg Hill & Associates.  He commented that he was very concerned he would lose his job at the airport if convicted.  He knew of co-workers who lost their jobs due to a conviction and was quite fearful.

Greg explained how such cases are handled in the Torrance Superior Court by the Redondo Beach City Prosecutor’s office.  Greg explained that since the client had no prior criminal history and the crimes alleged were eligible for judicial diversion, the pending charges may be resolved through judicial diversion if the judge granted this.  Greg explained that otherwise, it was likely that the Redondo Beach City Prosecutor assigned to the case would characterize the case as “aggravated” public intoxication and propose a rather heavy punishment (heavier than is customary in Downey, Fullerton, Airport Courthouse and Long Beach courthouse).

Greg suggested that the client attend as many Alcoholics Anonymous (AA) meetings as he could prior to the arraignment.

At the time of the arraignment, however, the client regretted to say he had attended no AA meetings at all.  The Redondo Beach City Prosecutor’s offer was a conviction to public urination (and dismissal of the public intoxication charge), but with two years of summary probation, with a requirement that while our client was on summary probation, he would perform 80 hours of community service, make a $550 contribution to the Hermosa Beach public nuisance abatement fund (to pay for better lighting near the public restrooms, better signage to such restrooms and, one day, construction of more public restrooms), payment of the $348 Hermosa Beach booking fee, attend 40 AA meetings and stay away from the Pier Plaza area.  Our client would also have to pay restitution to Robert’s Liquor for the bucket, if it needed replacement.

Mindful that the client would lose his job if convicted of anything, Greg asked the judge in the Torrance Superior Court to impose judicial diversion.  The judge agreed, allowing our client to earn a dismissal of the case in six months if he paid the $550 nuisance abatement fee, the booking fee, did 40 hours of community service, paid restitution to Robert’s Liquor (if any claimed) and stayed away from the Pier Plaza area during the six months.

Our client readily agreed to judicial diversion to keep his job.  He was happy that he had retained Greg Hill & Associates, as he had otherwise not known about judicial diversion and most likely would have agreed to the tough plea bargain offered by the Redondo Beach City Prosecutor, thereafter losing his job.  This was prevented, he appreciated, by retaining Greg Hill & Associates.