Our client, a Navy veteran, was found passed out a sidewalk along 13th Street Court in Hermosa Beach.  It was approximately 1:00 a.m. on the day before the Fourth of July.
Officers finding him described him as “asleep in a pool of his own drool.”  As the reader of this summary may be aware, 13th Street Court is more of an alleyway just north of and parallel to the Pier Plaza area.
When contacted by the police, he stood up, but then fell down again.  Officers asked him if he had been drinking that evening and he bluntly replied, “Yes, too much.”  When asked where he was, he answered, “Torrance.”  When asked what time it was, he said “3 a.m.”
Because he obviously too drunk to care for his own well-being, as he could not stand up on his own, officers took him to the Hermosa Beach Police Station, where he had been just a few month earlier on a DUI with a crash into a parked car less than 100 yards away from where he was found passed out on 13 Street Court.  He was booked on charges of violating Penal Code § 647(f), “public intoxication,” as he was so intoxicated that he was unable to care for his own well-being.  He was then released on his own recognizance about noon. 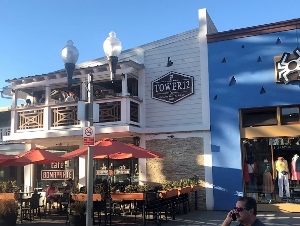 Tower 12 Bar Hermosa Beach
The same day, the client called Greg Hill & Associates, who had successfully asked the judge to grant military diversion for the client on the DUI just about a month earlier.  The client spoke with Greg Hill again, sheepishly explaining that he had just spent the night again in the Hermosa Beach jail, although not for DUI again, but for public intoxication.
The client then explained to Greg what he remembered.  He had been at Tower 12 on the Hermosa Beach Pier Plaza area and was drinking quite a bit.  He had wisely taken an Uber to the area, but after drinking quite a bit, forgot about this and looked for his car in the parking garage.  He walked up and down the parking area, searching for his car, but never finding it.  He was convinced that it had been stolen (actually, it was totaled in the car accident months earlier, but he forgot about this, perhaps due to his intoxication).
He then decided to take Uber home, but was so tired from walking back and forth up and down the parking structure (it is three or four stories high, with approximately 250 parking spots inside) that he decided to sit down to rest his legs.  After he did this, he fell asleep and officers then found him.
Greg then explained that this new arrest may cause the client to lose military diversion and that the new case would be punished quite forcibly, as the Redondo Beach City Prosecutors had a reputation of being heavy on punishment at times.  In this case, the Redondo Beach City Prosecutors might be quite zealous in trying to send our client a message that alcohol and he were a bad mix.
The client understood the gravity of the situation, he said.  Greg recommended that the client attend 20 Alcoholics Anonymous (AA) meetings before the arraignment to demonstrate he was serious about sobriety and being more responsible about his alcohol use, if any.
The day before the arraignment date then arrived and Greg asked the client for documentation showing he had attended the 20 AA meetings he agreed to attend.
The client sadly reported that he had not attended any because he was too busy.
Greg then went to the client’s arraignment, quite confident that the plea bargain offered from the Redondo Beach City Prosecutor would be perhaps the most brutal offer ever on a public intoxication charge.
Much to Greg’s surprise, the Redondo Beach City Prosecutor offered our client a dismissal if our client attended 26 AA meetings and paid the Hermosa Beach booking fee of $358.  The client’s criminal history of DUI (and the date of this and the arresting agency was identified) was attached to the police report and complaint provided to Greg at the arraignment, but the Redondo Beach City Prosecutor did not seem to notice this or care.
Greg reported this amazing offer to the client, who was overjoyed with his good luck in this regard.
For more information about public intoxication and diversion, please click on the following articles:
Contact us.