Our client, age 31, had everything going for him.  He had a good job, two degrees from UC Berkeley and masters degree in urban planning from UCLA.  He had no prior criminal history.

Despite this, he went onto Backpage.com and found a woman who interested him.  He contacted her via text message, asking her if she was available.

The Gist of This Summary:  It often seems to us that the most unlikely people to patronize a prostitute do so.  In the following case, our client with multiple degrees from prestigious schools and no criminal history fell for a police sting through Backpage.com and the Vagabond Inn near USC.  We resolved this case as a DA reject.

The woman texted back that she was and asked him what he was interested in.  This was the classic formula used by a police sting operation to make the “john” initiate the conversation about sex in exchange for money, which is a fundamental part of solicitation of prostitution and a violation of Penal Code § 647(b).

Our client explained that he was interested in sex and the woman, who was a police decoy, texted back that it would cost him $60 for a half-hour.  Our client asked what this would include and the woman described it would be a full-body massage, including oral and followed by “everything.”

Our client responded that he wanted to meet her, so she instructed him to meet her in the parking lot of the Vagabond Inn on Figueroa near U.S.C. at a certain time.  She said she already had a room.  She then described what she was wearing so he would be able to recognize her. 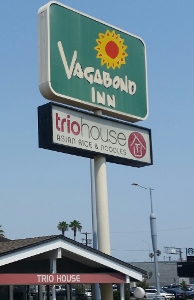 Our client then went to the Vagabond Inn and parked his car.  He looked around and spotted the woman by what she was wearing.  He got out of his car and walked over to her, asking her if she had been waiting long.  She seemed pleasant and responded, no.

She then instructed him to follow her upstairs to a room, asking him if he brought the money.  Our client said nothing, but padded the breast pocket of his jacket to indicate the money was in his jacket.  She saw him do this and continued going up the stairs.  He followed.

After she opened up the door and let him in in front of her, she stepped inside and turned on the lights.  There stood two police officers, who identified themselves and asked our client to have a seat on the bed.

Our client’s golden resume and whole world looked ruined.  He produced his driver’s license, showed the police his wallet containing $60 and several rubbers.  The police were friendly with him and had him sign a promise to appear in the Clara Shortridge Foltz criminal building in about two months for an arraignment.  They then returned the client his license and wished him good luck.

The client left in his car, which was not impounded as police are allowed to do in such cases.  The client drove home in a daze, but about two weeks later, he called Greg Hill & Associates.

Greg and the client discussed the facts of the case and how such cases are typically handled in Downtown Los Angeles.  Greg explained that he would write a letter to the District Attorney’s Office, requesting an office hearing and enclosing our client’s resume and three degrees, but that the client should not expect an office hearing.  However, if an office hearing were allowed, this would prevent a filing and preserve the client’s clean record.

Greg then prepared the letter and mailed it to the District Attorney.

On the date of the arraignment, Greg appeared in the Clara Shortridge Foltz criminal court (also known as “CCB”).  No case was filed and the clerk advised that the case was a DA reject.

Our office cautions that such a welcome result may not have been related at all to Greg’s letter to the District Attorney’s office, but this letter also may have been the reason for the decision not to file the case.  Nonetheless, the client was very happy regardless of why the case was not filed.