Among criminal defense attorneys, there is an often heard falsehood that Penal Code § 148(a)(1) (misdemeanor obstructing, delaying or resisting an executive officer) is a lesser-included offense of Penal Code § 69 (felony resisting arrest by violence or threat of violence).
This misunderstanding is usually of no consequence and is, theoretically, a helpful way to understand the relationship between the two crimes, at least generally.
When precision is required, however, this falsehood can be painful as the following summary showed of a recent reported decision from the San Diego County Superior Court, which was appealed up to the Fourth Appellate District Court.

Defendant Cody Kruse was invited over to dinner at his girlfriend’s apartment in Escondido with a large group of other people.  During dinner, his girlfriend and he got into an argument about some text messages Kruse had been exchanging with another woman and his girlfriend told him to leave the dinner party, which he did.
However, about 30 minutes after he left, he returned because he had left his cell phone and backpack at the apartment.  The front door to the apartment was locked and his girlfriend did not want to let him back inside.  She slid his cell phone out to him under the door, but refused to give him his backpack.  As a dinner guest was leaving the party, Kruse saw the open door and rushed inside.
He then sat on the couch inside the apartment, which greatly upset his girlfriend.  Kruse laughed, which made his girlfriend even more upset.  The situation deteriorated quickly and Escondido police officers arrived just as Kruse and his girlfriend were physically fighting.  The officers then arrested the girlfriend for misdemeanor domestic violence against Kruse and handcuffed Kruse, detaining him outside the apartment.
Once outside, Kruse continuously yelled and screamed at the police officers and was generally uncooperative.  At one point, he bragged about getting six months in jail for committing a murder.  At some point, police released Kruse, gave him his backpack and told him to leave. 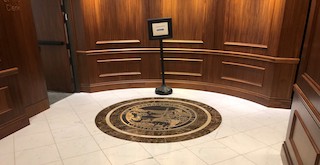 Fourth Appellate District Court of Appeal Div 1 San Diego
This upset one of the dinner guests, who told police that earlier that evening Kruse had threatened to put a bullet through her brain.  The officer then arrested Kruse for making a criminal threat.  The officer then searched Kruse’s backpack and found methamphetamine.
On the way to the police station, Kruse stepped on the seat belt in the car to prevent the officer from fastening it and then once the officer did prevail, Kruse unbuckled it.  Once he got to the police station, he made threats against one of the officers.
At trial, a jury convicted Kruse of making a criminal threat (Penal Code § 422), attempting to deter or prevent an executive officer from lawful performance of his duties by means of violence or threat of violence (Penal Code § 69) and possession of a controlled substance, methamphetamine (Health & Safety Code § 11377(a).
The trial court judge, Blaine K. Bowman, sentenced Kruse to three years and eight months in state prison, consisting of three years as the upper term for the criminal threats, three years for counts two for resisting arrest, to run concurrent with the sentence for criminal threats and eight months on a separate probation revocation case.
Kruse appealed on several grounds, but this article will only discuss his argument that the judge erred by refusing to instruct the jury on Penal Code § 148(a)(1), willfully resisting, delaying or obstructing a public officer.  Kruse argued that 148(a)(1) was a lesser-included charge of Penal Code § 69, attempting to deter an executive officer from performing any duty by means of threat or violence.
The Fourth Appellate District denied Kruse’s appeal, noting that in People v. Smith (2013) 57 Cal.4th 232, the California Supreme Court held that the offense described in Penal Code § 148(a)(1) is not a lesser included offense of section 69.  In Smith, the Supreme Court noted that section 148(a)(1) is not a lesser include offense based on the statutory elements of each crime.
First, section 69 lists two separate ways in which the offense can be committed.  The first is by threats or violence to deter or prevent an officer from performing a duty imposed by law.  The second is resisting by force or violence an officer in the performance of his or her duty.  One can violate section 69 by attempting, through threat or violence, to deter or prevent an executive officer from performing a duty without also violating 148(a)(1).  Such a threat or violence does not necessarily resist that officer in the discharge or attempt to discharge his or her duty under 148(a)(1).
We bring this summary to the reader’s attention to show that 148(a)(1) is not always a lesser-included offense of Penal Code § 69, so if a judge does not instruct on 148(a)(1) when one is charged with § 69, that is not always legal error, as Mr. Kruse found out.
The citation for the Fourth Appellate District Court ruling discussed above is People v. Cody Kruse (4th App. Dist., 2020) 56 Cal. App. 5th 1034, 271 Cal. Rptr. 3d 20.
For more information about resisting, delaying or obstructing a police officer, please click on the following articles:
Contact us.
Serving Torrance, Long Beach, Compton, Airport Courthouses and Other Courthouses.