Petitioner was a fifty-three-year old woman living alone with her cats in Pasadena who owned a condominium in Diamond Bar.  She rented the condo to our client, age 35 for about a year and a half.
Immediately after he moved in, he discovered that the air conditioner and heat did not work, so he notified the landlord.  The landlord refused to fix it, claiming she did not have enough money to pay for such repairs or even a replacement.
Our client was somewhat desperate for air conditioning because the temperature at that time was close to 110 degrees during the day, so he simply contacted a heating and air conditioning company himself and paid for the worker to come out to look at the unit for possible repair.  The worker told our client that the unit needed to be replaced, so our client paid for a replacement air conditioning unit and heater.  This cost close to $10,000.  He advised the landlord of this and provided her receipts for the expense.  She thanked him and promised to reimburse him as soon as she was able. 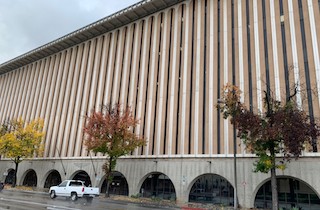 Pasadena Courthouse
Shortly after he moved in, he also discovered that the carpet smelled quite a bit.  He looked under parts of the carpet and found a thick layer of black and dark green mold, so he notified the landlord of this as well and requested to have it removed and replaced.  She again stated that she lacked the money to pay for this, so our client, worried for his health, paid for the removal of the carpet, cleaning of the floor boards to remove the mold and then installation of new carpet.  This expense was approximately $4,000 and he again sent the landlord the receipt and she promised to reimburse him when able.
A year and a half later, the landlord had still not paid even one penny toward reimbursement and the client also realized his rent was several hundred dollars over similar units nearby.  So, he notified the landlord that he would be moving out and demanded reimbursement.  The landlord again insisted she could not reimburse him.
Our client suggested she obtain a loan, take out a home equity line of credit on her Pasadena home, etc.  The landlord refused and this angered our client.  He could see she was never going to repay him.  The tone of his e-mails, including to arrange return of the property’s keys and to arrange move-out inspections, became curt and, admittedly, impolite.  He threatened to post a negative review of her on RipOffReport.com.  Coincidentally, someone did so, a person name “J.C. from Pomona,” but our client then moved to Chino and his initials were not J.C.
The landlord then refused to return even one cent of his $1,500 rental deposit.  She kept it all, claiming she needed to patch some holes in a wall above a fireplace.
In response, once our client had vacated the unit and returned the keys, the landlord filed a civil restraining order to quiet our client from ever contacting her again.  She claimed our client had “defamed her” by posting a review in RipOffReport.com, but conceded she only suspected it was him and was not certain our client did so.  She claimed our client caused her anxiety and emotional distress, thereby harassing her, by asking for reimbursement for the expenses he incurred and she promised to repay him.
Her petition to stop harassment was quite transparent for what it really was – an attempt to have a judge silence our client in his legitimate attempts to collect a debt.  Perhaps it was not even transparent, as petitioner described the subject matter of her request for a civil restraining order as defamation.  This presumed that whatever posting petitioner feared our client would post would be false, as defamation is defined as publication of an untrue statement about another person that damages their reputation.
Indeed, if our client were to post anything stating that petitioner rented a condo with inoperative air conditioning and moldy carpet, this would not be untrue.
The client was served with the request for a civil restraining order and came to Greg Hill asking what Greg could do to help him.  Greg reviewed the petition and advised that he could appear at the hearing on the civil restraining order and prepare a written opposition to the petition.
In reviewing the petition, Greg noted that the allegations did not meet the legal standards of Civil Code § 527.6 for establishing harassment because all communications between petitioner and our client were for a legitimate purpose – resolution of the amounts owed by petitioner to our client for his improvements that she agreed to repay, as well as the move-out inspection and return of the keys.
Moreover, the petition completely failed to allege that “harassment” would continue into the future once the security deposit and improvements were resolved.
Greg prepared an opposition to the petition and then appeared at the hearing with the client in the Pasadena Superior Court.  The judge had obviously read and agreed with our opposition to the petition, but he patiently let petitioner explain, very emotionally, how our client had caused her anxiety and stress by demanding payment that she agreed to.  The judge’s patience gradually wore away after petitioner giving a monologue of insults to our client.
Finally, the judge barked at the petitioner “stop!” and denied her request, much to her dismay.
Our client was relieved that petitioner did not persuade the judge and was happy that the judge firmly rebuked her.  Our client then served her with a small claims action to recover the expenses of the air conditioner and the carpet.
For more information about civil restraining orders, please click on the following articles:
Contact us.
Serving Torrance, Long Beach, Compton, Airport Courthouses and Other Courthouses.