Our client, age 19, was driving with a friend from Palos Verdes Estates to Redondo Beach.  It was about 2:00 p.m. on a Sunday.  The client was smoking marijuana as he drove, but finished it just before entering the Malaga Cove area and the Malaga Cove Plaza stop sign. 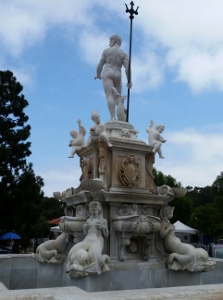 Malaga Cove Fountain
As the client went around the traffic triangle and onto Palos Verdes Drive North to exit the city, he could see a police car trailing him.  As he expected, the police officer turned on his overhead blue and red flashing lights and made the traffic stop.

Summary in 30 Words or Less:  Client, age 19, stopped and arrested by Palos Verdes Estates police, who found meth and a meth pipe in his glove compartment.  Case resolved for judicial diversion and dismissal.

Since the client had just finished smoking the marijuana, when the officer approached the open driver’s side window, he could not avoid smelling marijuana.  Our client was aware of this and told the officer that is what he smelled indeed and that the client had a medical recommendation for this.

The officer did not tell our client the reason for the traffic stop, but ordered our client and his friend out of the car, handcuffing them and ordering them to sit on the curb on the east side of Palos Verdes Boulevard.

The officers opened the glove compartment, unzippered a backpack and unrolled a sock in the center console area.  In the sock was the client’s smoking pipe, which had a small amount of meth residue.  The officers triumphantly held up the pipe, saying, “Where is the rest?”  The possession of this pipe was a violation of Business and Professions Code § 11364, possession of drug paraphernalia.

The officers spent almost a half an hour, thoroughly searching the car, including the truck and the engine area, too.  Finally, they gave up finding anything more and took in our client to the police station, where they strip searched our client (we think, just to humiliate him).  In his wallet, they found a rolled up $100 bill with about one gram of meth.  This was a violation of Health and Safety Code § 11377(a), possession of a controlled substance.

The client was released upon promising to appear in the Torrance Superior Court in about a month.  About a week before court, he called Greg Hill and retained him.

Greg appeared in the Torrance Superior Court and discussed probable cause to search the car under the automobile exception.  The probable cause for the search was for marijuana (“pot”), not dope, which could be meth, cocaine or other drugs, but not marijuana.

The District Attorney assigned to the case understood the argument, but made an offer that the client could earn a dismissal by completing an 18-month drug rehabilitation program called Prop 36.

Greg thought this was far too much for such a small amount of meth and asked to resolve the case for 26 Narcotics Anonymous (NA) meetings instead.

The prosecutor refused, so Greg filed a motion to suppress evidence, based upon the “where’s the dope” comments from the police officer that were unsupported by probable cause for anything other than marijuana.

The motion came up for hearing three times and on each instance, the police officers failed to appear in court.  On the third time, the judge, exasperated, asked the prosecutor what the offer was on the case.  The prosecutor told the judge, to which the judge asked Greg if 26 NA meetings over six months to earn a dismissal would resolve the case (as Greg first suggested to the DA months earlier).

Greg replied that it would and the client accepted the judicial diversion deal, happy that Greg had filed the motion to suppress to trigger the judge’s involvement to get the deal to dismiss the case.