Our client, age 16, was a smart and athletic incoming junior.  He had made the varsity team in his sophomore year and was taking several AP classes.  His GPA was over 4.0.  Both his parents were smart people, one even was an attorney.

For reasons not entirely clear, however, our client left his bedroom at about midnight one summer’s night and took a screwdriver and pliers with him.  He snuck out of the house and walked a few blocks to a utility company building nearby that had an access door secured by a padlock.  The building was only 25 feet by 25 feet in size.

In a Nutshell:  Client, age 16, arrested by Palos Verdes Estates Police for commercial burglary and possession of burglary tools in the early morning darkness just after midnight when police see him trying to break into a 25 foot by 25-foot utility building along Paseo Del Mar.  Case not filed in juvenile court and no diversion program ordered. 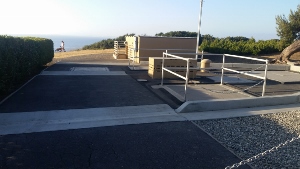 Utility Company Site
The passing motorist was a Palos Verdes Estate Police Officer.  The officer stopped his car and walked over to the utility company building to check on our client, mad at work and oblivious to the officer observing him.  As the officer got closer, he could see that the suspect was a teenager.

The officer silently approached to a point where he could almost grab our client if he tried to run away.  The officer, six foot, five inches tall, was an imposing person.  So when he asked our client, “what are you doing?” our client was stunned.

He fumbled for words and the officer kindly told him that he would be taking him in to the police station for attempted commercial burglary (Penal Codes §§ 664 / 459) and possession of burglary tools (Penal Code § 466).  Our client was handcuffed without incident and taken to the Palos Verdes Estates Police Department station.  Officers were gentle with the boy, as he was very respectful and embarrassed, apologizing profusely and explaining he was just curious to know what was inside the building.

The client’s parents were then called, who were in severe shock immediately.  This was their oldest son.  They were worried if he had done things like this in the past, but not gotten caught by the police.

The parents immediately called Greg Hill & Associates once their son had been released to them and been home for a few hours.  Attempted commercial burglary is a felony and possession of burglary tools is a misdemeanor.  The parents had read on the Internet what the potential jail and prison sentences were and were worried what would happen to their son.

Greg met the parents and their son at their home on a Sunday afternoon and discussed how such cases are usually handled out of the Long Beach Juvenile Court (within the Superior Court there) and how, more often than not, the case is referred to a diversion program prior to reaching the court.

Greg then a letter to the Palos Verdes Estates Police Department and the Long Beach District Attorney’s office, enclosing the client’s high school transcript and resume and suggesting that the matter be referred to pre-filing diversion rather than filing the case in court.

Less than a week after sending out the letters with the resume and transcript, a detective from the Palos Verdes Estates Police Department contacted the client’s parents and said they wanted to speak to their son in person at the police station.

The parents contacted Greg Hill, who then contacted the detective to arrange the meeting so he could attend the meeting and defend the client.

The meeting was then held, wherein the detective discussed the severity of the conduct with the client, without the parents present.

The case indeed was not filed at all and no diversion program was even ordered.  The parents and the client were pleased with this informal resolution.