In Miller, the U.S. Supreme Court held that to determine whether a punishment is cruel and unusual, and thus violates of the Eight Amendment, “courts must look beyond historical conceptions to the evolving standards of decency that mark the progress of a maturing society.”  Graham v. Florida (2010) 560 U.S. 48, 58.  This, the court explained, was because the standard of extreme cruelty is not merely descriptive, but necessarily embodies a moral judgment.  “Its applicability must change as the basic mores of society change.” Kennedy v. Louisiana (2008) 554 U.S. 407,419. 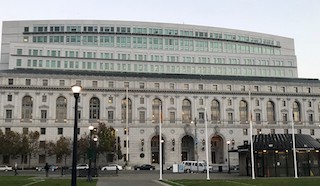 California Supreme Court San Francisco
There were actually two homicide cases involved in Miller, both involving life sentences without the possibility of parole for fourteen year olds.  Each sentence was imposed under sentencing schemes that mandated life without the possibility of parole.  In Miller, the U.S. Supreme Court ruled such sentences violated the Eighth Amendment and remanded the cases back to the trial courts with instructions that the trial court judges there re-sentence the juveniles after analyzing the individual defendant and the “distinctive attributes of youth,” such as an ability to improve impulse control, problem–solving techniques and handle conflict.
In light of the U.S. Supreme Court’s ruling, the California Supreme Court agreed to hear People v. Luis Angel Gutierrez (2014 DJDAR 5722).  At issue in Gutierrez was whether, in light of Miller, the life without possibility of parole sentences of Mr. Gutierrez and Mr. Andrew Moffett were proper.  Each defendant was 17.  Mr. Gutierrez shot a police officer as he was escaping from a robbery of a Wells Fargo and a Ralley Supermarket.  Mr. Moffett raped his aunt and then stabbed her to death.  Both were sentenced to life in prison without the possibility of parole.

Under California Penal Code § 190.5(b), the penalty for sixteen year old or seventeen year old juveniles who commit murder with special circumstances is confinement in state prison for life without the possibility of parole or, at the discretion of the court, 25 years to life in state prison.

The California Supreme Court, in reviewing the sentence of Mr. Gutierrez and Mr. Moffett, ruled that Penal Code § 190.5(b) did not violate Miller, but emphasized that there should never be a presumption in favor of a life sentence without the possibility of parole for a 16 to 17 year old who commits a murder with special circumstances.

Therefore, the California Supreme Court held that 190.5(b) requires the sentencing court to consider various individual factors before sentencing such as how the youth of the offender affected the conduct.  This is a new requirement because for 20 years, ever since People v. Guinn (1994) 28 Cal. App. 4th 1130, section 190.5(b) has been construed to create a presumption in favor of life with parole for juveniles convicted of special circumstances murder.

Justice Goodwin Liu wrote the majority opinion for the court.  The gutsy opinion opens the door for appeals of sentences of life without the possibility of parole that were sentenced after Guinn.  Legal scholars estimate that there may be hundreds of adults that now may be entitled to resentencing.  Liu added fuel to the fire by emphasizing in his opinion that Miller called life without parole sentences should be “uncommon,” perhaps mandating that most sentences of life without the possibility of parole should be reduced.

In reconsidering the sentence, the court should consider the maturity of the defendant at the time, peer pressure as it affected defendant in committing the crime, family pressure at the time affecting defendant and, most importantly, the possibility of rehabilitation.  In addition, the court should consider the normal mitigating and exacerbating factors such as the defendant’s prior record, the effect on the victim’s family and the maturity of the defendant, among other factors.
The citation for the California Supreme Court ruling discussed above is People v. Luis Angel Gutierrez (2014) 58 Cal.4th 1354, 324 P.3d 245.
For more information about sentencing of juveniles for serious crimes, click on the following articles:
Contact Greg Hill & Associates