The right to a fair trial is held as almost sacred by our courts.  There are additional rights that guarantee a fair trial, such as the right to cross examine a witness to resolve credibility issues.

Article in Short Form:  Mistrial Granted in Murder Trial When District Attorney Asks Over 100 Leading Questions of a Witness that Refuses to Answer Any Question.

The tension between these competing rights came to a boiling point in People v. Tony Murillo, a Los Angeles Superior Court case arising out of North Hollywood.

The factual background of the case is important to understand why on appeal a mistrial was granted.  On January 23, 2010, three members of the North Hollywood Locos (“Locos”) wrote graffiti in the territory of the rival gang, the North Hollywood Boyz.  It was about 11:00 p.m.

Defendant Tony Murillo is a member of another criminal street gang called Clanton 14, which is an ally of the North Hollywood Boyz.

After the Three Locos walked away from the wall, they were approached by a man in black who asked them, “Where are you from?”  This type of question is a common question asked by one gang to another. 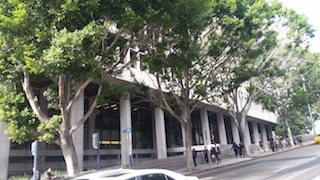 Clara Shortridge Foltz Criminal Courts Building CCB
The Three Locos answered “Locos.”  The man dressed in black then responded “Clanton” and opened fire, killing one of the Locos.  He also shot one of the other Locos in the leg.  The man in black shot the others from close range – about a foot away.
One of the Locos called the police.  The Loco shot in the leg was treated and taken to the police station, where he then identified Tony Murillo as the shooter in a photographic lineup.  At trial, however, the same gang member refused to testify that it was Tony Murillo who fired the shots.  He just answered, “I have nothing to say” over and over.

This frustrated the prosecutor, who began to become angry.  The attorney for the Locos objected to the questions as becoming argumentative.  The prosecutor asked him if it was true he wrote that “Tony Murillo is the shooter” at the police station.  The defense attorney requested the ability to cross-examine the Loco, but the trial judge denied the request, commenting that there was no testimony offered.

After sixteen leading questions, counsel for Murillo again objected to the questions as harassing and argumentative.  The judge overruled the objections and allowed the prosecutor to ask 94 more concerning the prior statements to detectives.

Defense counsel then moved for a mistrial, or alternatively, to strike the testimony of the witness.  The judge denied both motions, saying there was no testimony to strike.

After five days of deliberations, the jury convicted Tony Murillo of first degree murder, attempted murder of two other Locos and possession of a firearm by a felon (Penal Code § 12021(a)(1)).

Murillo then appealed the trial court’s denial of the motion for mistrial.  The Second Appellate District, in People v. Tony Murillo (2014 DJDAR 15203), agreed with Murillo that when the trial judge allowed the prosecutor to ask unlimited questions, none of which resulted in anything but suggestions the killer was Murillo, Murillo’s right to a fair trial was damaged so much that it was incurable by a later court admonition or instruction.  People v. Demont (2011) 53 Cal. 4th 1, 40.

Moreover, the appellate court pointed out that the Loco’s photographic identification of Murillo was equivocal in nature.  He wrote “looks like he also selected another person in another lineup later, writing “kinda looks like the suspect.  Not sure.”  The trial judge then denied Murillo’s attorney the right to cross examine the Loco, saying that the Loco had not testified to anything, so there was nothing to cross examine him about.

We are pleased with this ruling by the appellate court, as it certainly seems that Mr. Murillo’s right to a fair trial was taken away.
The citation for the Second District Court of Appeals ruling discussed above is People v. Tony Murillo (2d App. Dist., 2014) 231 Cal.App.4th 448, 179 Cal. Rptr. 3d 891.
For more information about the issues in this case, click on the following articles:
Contact us.