Our client, age 26, was driving southbound on Cedar Avenue, just north of Eighth Street in Long Beach.  It was about 6:15 p.m. in February, so it was dark out and our client was driving without his headlights on.
A Long Beach Police Department officer and his partner were driving northbound on Cedar in the same block and noticed our client driving without his headlights on.
The police turned around and pulled over our client to alert him to turn on his headlights.  When they pulled him over, they asked for his driver’s license, insurance and registration.
Our client handed over a Photo-Shopped driver’s license to the police officer, which the police immediately recognized as Photo-Shopped.  Our client also had no proof of insurance or vehicle registration.
His Photo-Shopped license, however, had his proper name and his true date of birth, as well as his correct address.  It just was not issued by the State of California. 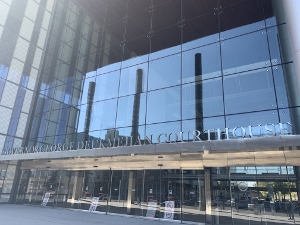 Long Beach Courthouse
Police asked him why he did not have a proper government-issued driver’s license.  Our client explained that he was “an indigenous person and did not have to provide any identification because he was protected by the Fifth Amendment and that he was not driving or operating a vehicle, but traveling.”  He also told police that he “was not subject to corporation laws by the government and that he was practicing common law as a free person.”
The police did not accept our client’s explanation as why he should be simply allowed to leave and proceed on.  Instead, the police arrested our client.  According to the police, our client attempted to explain his position further while police drove his to the police station.  Our client’s car was also towed.
Our client was held overnight and then released the following morning after signing a promise to appear in the Long Beach Superior Court in about six weeks for a charge of providing false identification to a police officer (Penal Code § 148.9(a)) and operating a motor vehicle without a driver’s license (Vehicle Code § 12500).
Our client then moved to Chicago to live with a friend there.  He missed his court date in Long Beach and eighteen months passed.  While in Chicago, he eventually needed a job, so he applied with the public transportation organization that operated buses and trains in Chicago.
The organization advised him that the Long Beach Superior Court in California had issued a bench warrant for him and he had to take care of the warrant and the case before being offered a job to work in Chicago.
The client called Greg Hill & Associates and explained that he had a bench warrant in the Long Beach Courthouse that needed to be recalled.  He spoke with Greg Hill, but the client did not remember much of what had happened or how the ticket was issued.
Greg then appeared in the Long Beach Superior Court and had the bench warrant recalled.  One issue to resolve was whether the client had signed a promise to appear in court and if not, could the case be dismissed based on a Motion to Dismiss for Deprivation of the Right to a Speedy Trial under Serna.  Unfortunately, the client had signed such a promise to appear and the document was in the file.
The client had applied for and even received a proper, government-issued Illinois driver’s license, so Greg took a photocopy of that to court.  Greg showed this to the Long Beach City Prosecutor handling the case, who viewed the case with some seriousness.
The initial offer was three years of informal probation, a $300 fine plus penalties and assessments and ten days of community labor.  Greg was shocked by the severity of the offer, especially because our client had no prior criminal history.
Eventually, however, over several court appearances, Greg was able to negotiate a far better plea bargain for the client – 18 months of informal diversion, wherein all charges would be dismissed if our client performed twenty days of community service in Illinois.  The client accepted this offer, happy to avoid a conviction because he needed the work in Chicago.
Greg was a bit stunned over the offer including twenty days of community service, but the client was unbothered by so much work to do.  He was simply happy to have the bench warrant recalled, our plea bargaining to avoid a conviction with steep fines our client could not afford and the chance to earn a dismissal and avoid a conviction.
For more information about the issues raised in this case summary, please click on the following articles:
Contact us.
Serving Torrance, Long Beach, Compton, Airport Courthouses and Other Courthouses.